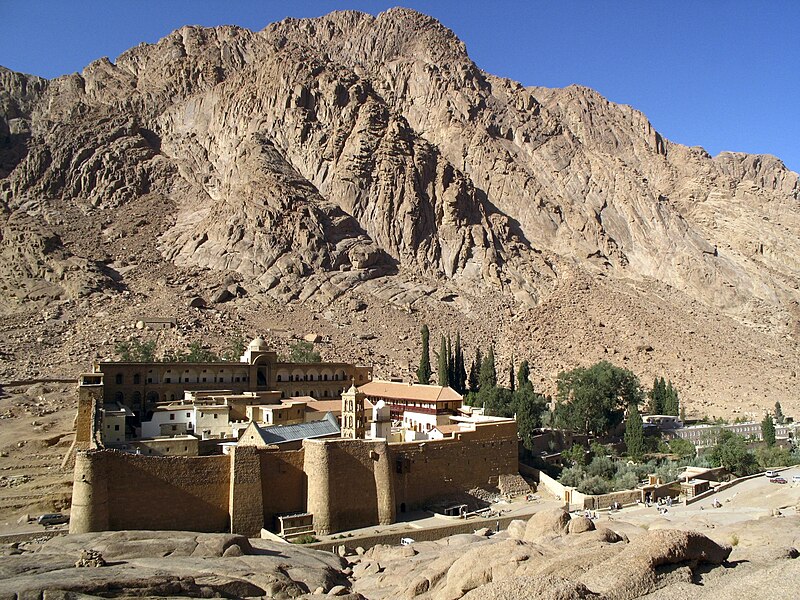 The Orthodox Monastery of St Catherine stands at the foot of Mount Horeb where, the Old Testament records, Moses received the Tablets of the Law. The mountain is known and revered by Muslims as Jebel Musa. The entire area is sacred to three world religions: Christianity, Islam, and Judaism. The Monastery, founded in the 6th century, is the oldest Christian monastery still in use for its initial function. Its walls and buildings of great significace to studies of Byzantine architecture and the Monastery houses outstanding collections of early Christian manuscripts and icons. The rugged mountainous landscape, containing numerous archaeological and religious sites and monuments, forms a perfect backdrop to the Monastery.

Criterion (i): The architecture of St Catherine’s Monastery, the artistic treasures that it houses, and its domestic integration into a rugged landscape combine to make it an outstanding example of human creative genius.

Criterion (iii): St Catherine’s Monastery is one of the very early outstanding examples in Eastern tradition of a Christian monastic settlement located in a remote area. It demonstrates an intimate relationship between natural grandeur and spiritual commitment.

Criterion (iv): Ascetic monasticism in remote areas prevailed in the early Christian church and resulted in the establishment of monastic communities in remote places. St Catherine’s Monastery is one of the earliest of these and the oldest to have survived intact, being used for its initial function without interruption since the 6th century.

El Tor, also romanized as Al-Tur and At-Tur and known as Tur Sinai, formerly Raithu, is a small city and the capital of the South Sinai Governorate of Egypt. The name of the city comes from the Arabic term for the mountain where the prophet Moses received the Tablets of the Law from God; this mountain is designated Jabal Al Tor. At-Tur itself appears to have been founded in the 13th century near the site of the ancient Raythou (medieval Raya). The El Tor strain of cholera was discovered there in 1905. It was a quarantine camp for Muslim pilgrims returning from Hajj (the Islamic pilgrimage to Mecca). The Raithu desert is situated around El Tor, between Saint Catherine and the Red Sea. It is part of the Archdiocese of Mount Sinai and Raithu of the Eastern Orthodox Patriarchate of Jerusalem. The “Martyrs of Raithu” were 43 anchorites (early Christian hermits) murdered by bedouins (desert dwellers) during the reign of Emperor Diocletian (284-305CE) [read more].

Sharm el-Sheikh is a large resort at the south tip of the Sinai Peninsula in Egypt. The main reasons to visit are for scuba-diving and other water and beach activities, and to explore the Sinai desert. Often abbreviated to “Sharm”, in Arabic it’s pronounced Sharm i-Shaykh: the “Sha” is a sun-letter that absorbs the preceding “el-“. It’s the most developed and most cosmopolitan of the Sinai resorts. Sharm el-Sheikh is at the south tip of a desert peninsula backed by rugged mountains, with no historic trade or pilgrim routes through it, and no mineral wealth. So it remained an insignificant fishing village until the 20th century, when it developed as a naval base to control the shipping lanes east up the Gulf of Aqaba to Jordan and west up the Gulf of Suez to the canal. But that made it a target for military attack. World War II attacks were against the shipping convoys rather than town, Thistlegorm sunk in 1941 being one notable nearby casualty [read more].

Hurghada is a resort town on the Red Sea Coast of Egypt. Famous for its superb diving opportunities, Hurghada is especially appealing to those with little experience of scuba diving, who come to marvel at the underwater reefs and awesome marine life. Hurghada was once a fairly small and unimposing fishing village, next to the Red Sea. It has a number of superb beaches. Today, the resort of Hurghada is almost unrecognizable from its past life and has become a major destination in Egypt for budget tourists especially from Europe and Russia. It has more than 100 hotels, many of which line the shoreline, and numerous flights particularly from airports across Europe. Tourism is now a huge part of Hurghada and each year, many tourists choose to combine their holiday here with visits to other prominent locations along the Nile Valley, including the relatively nearby city of Luxor. The climate is very dry and rainfall is very rare [read more].