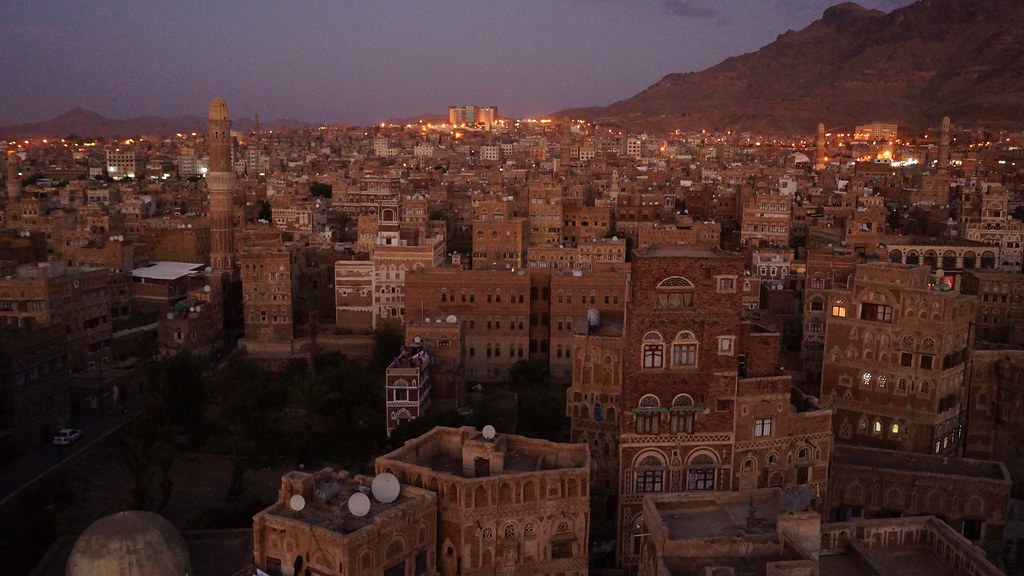 Situated in a mountain valley at an altitude of 2,200 m, Sana’a has been inhabited for more than 2,500 years. In the 7th and 8th centuries the city became a major centre for the propagation of Islam. This religious and political heritage can be seen in the 103 mosques, 14 hammams and over 6,000 houses, all built before the 11th century. Sana’a’s many-storeyed tower-houses built of rammed earth (pisé) add to the beauty of the site.

Situated in a mountain valley at an altitude of 2,200 m, the Old City of Sana’a is defined by an extraordinary density of rammed earth and burnt brick towers rising several stories above stone-built ground floors, strikingly decorated with geometric patterns of fired bricks and white gypsum. The ochre of the buildings blends into the bistre-colored earth of the nearby mountains. Within the city, minarets pierce the skyline and spacious green bustans (gardens) are scattered between the densely packed houses, mosques, bath buildings and caravanserais.

Inhabited for more than 2,500 years, the city was given official status in the second century BC when it was an outpost of the Yemenite kingdoms. By the first century AD it emerged as a centre of the inland trade route. The site of the cathedral and the martyrium constructed during the period of Abyssinian domination (525-75) bear witness to Christian influence whose apogee coincided with the reign of Justinian. The remains of the pre-Islamic period were largely destroyed as a result of profound changes in the city from the 7th century onwards when Sana’a became a major centre for the spread of the Islamic faith as demonstrated by the archaeological remains within the Great Mosque, said to have been constructed while the Prophet was still living. Successive reconstructions of Sana’a under Ottoman domination beginning in the 16th century respected the organization of space characteristic of the early centuries of Islam while changing the appearance of the city and expanding it with a second city to the west. The houses in the old city are of relatively recent construction and have a traditional structure.

As an outstanding example of a homogeneous architectural ensemble reflecting the spatial characteristics of the early years of Islam, the city in its landscape has an extraordinary artistic and pictorial quality. Its many-storied buildings represent an outstanding response to defensive needs in providing spacious living quarters for the maximum number of residents within defensible city walls. The buildings demonstrate exceptional craftsmanship in the use of local materials and techniques. The houses and public buildings of Sana’a, which have become vulnerable as a result of contemporary social changes, are an outstanding example of a traditional, Islamic human settlement.

Described by historians, geographers and scholars of the early Islamic and medieval eras, Sana’a is associated with the civilizations of the Bible and the Koran.

Criterion (iv):Within its partially preserved wall, it offers an outstanding example of a homogeneous architectural ensemble, which design and detail translate an organization of space characteristic of the early centuries of Islam which has been respected over time.

Criterion (v): The houses of Sana’a, which have become vulnerable as a result of contemporary social changes, are an outstanding example of an extraordinary masterpiece, traditional human settlement.

Criterion (vi): Sana’a is directly and tangibly associated with the history of the spread of Islam in the early years of the Hegira. The Great mosque of Sana’a, built in year 6 of Hegira, is known as the first mosque built outside Mecca and Medina.The Old City of Sana’a has contributed to and played a major role in Yemeni, Arab and Islamic World history through the contributions of historical Yemeni figures including Al Hassan B. Ahmed Al Hamdany, Ahamed Al Razy and Al Shawkany.

Sana’a is the capital of Yemen, located in the Yemeni Mountains and generally the first destination for travellers to that country. One of the oldest continuously-inhabited cities in the world (others being Jericho, Damascus and Aleppo), Sana’a is traditionally said to have been founded by Shem, the son of Noah. As a result, the city has the unlikely nickname of “Sam City”. Sana’a will start surprising you the moment you arrive at the airport. All the policemen and the civilians wear jambiya, the unique Yemeni dagger. Even small children wear little daggers. Many people have swollen cheeks because of chewing qat leaves. Outside the airport, all buildings look the same because of uniformly painted windows and walls. The city experiences a mild desert climate, with much more moderate temperatures than other Arabian Peninsula cities due to its high elevation. Sana’a is a great place for people-watching and culture observing. The unhurried pace of Yemeni life, coupled with the almost total lack of industrialisation seen in nearby countries, means that it’s quite possible to sit in a coffee shop and watch the world go by for hours on end [read more].

Ta’izz is a city in the South of the Yemeni Mountains. It is better developed than most Yemeni cities, with very good roads. It is also reasonably clean. Being around 130m above sea level means that the climate is quite pleasant throughout the year. Tai’zz lies at the foot of Mount Sabir (3.200 meters above sea level). The city is about 1.500 meters above sea level. Tai’zz was the capital of the Rasulid state. Ta’izz has road links to other major cities and a regional airport. Ta’izz is located 255 km south of Sana’a. The city wall has four gates and is crowned by the Cairo castle: Al-Qahira citadel (Cairo Castle). The castle on a hill above the city is nicely illuminated at night; Al Aruss mountain. 3000m above sea level. There is a good road all the way to the top; Al Janad mosque. Located north of the city. It was the second mosque to be established in Yemen; and al-Muzaffar mosque [read more].