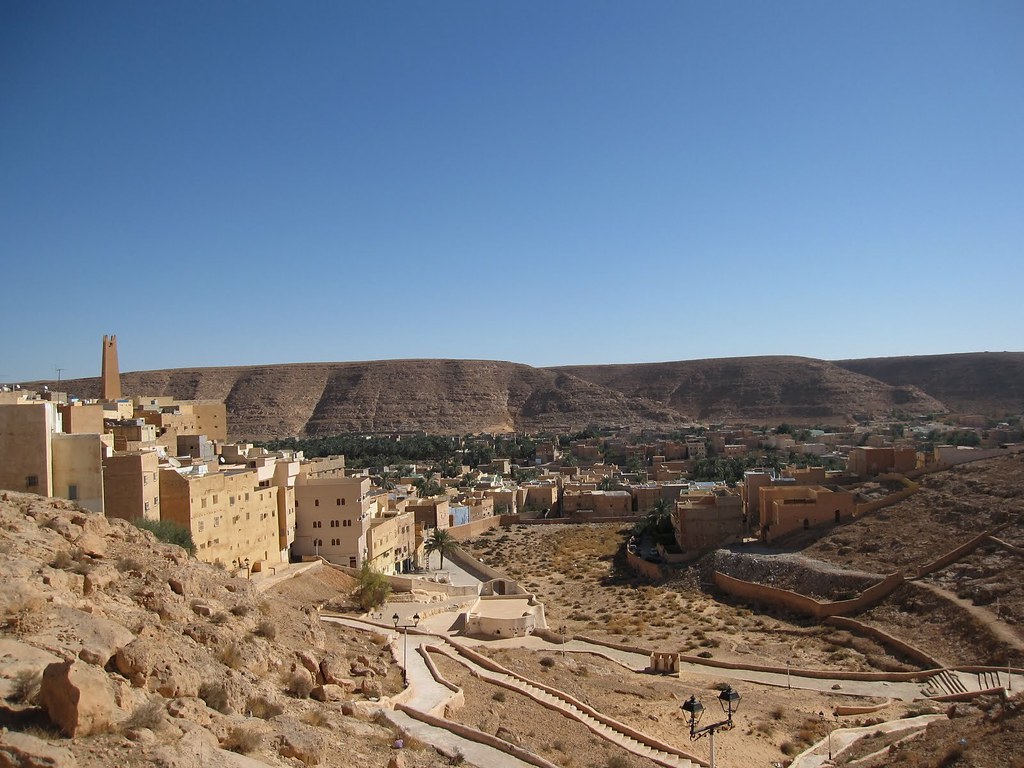 El-Atteuf, the oldest of the five valley towns (Stefan Krasowski/Flickr, CC BY 2.0).

Algeria (Ghardaia, El Guerrara, Ouargla)
Wilaya (province) of Ghardaïa
N32 28 59.988 E3 40 59.988
Date of Inscription: 1982
Criteria:
ii. to exhibit an important interchange of human values, over a span of time or within a cultural area of the world, on developments in architecture or technology, monumental arts, town-planning or landscape design;
iii. to bear a unique or at least exceptional testimony to a cultural tradition or to a civilization which is living or which has disappeared;
v. to be an outstanding example of a traditional human settlement, land-use, or sea-use which is representative of a culture (or cultures), or human interaction with the environment especially when it has become vulnerable under the impact of irreversible change;
Property : 665.03 ha
Ref: 188

The M’ Zab Valley, located within the limits of the Sahara desert, six hundred kilometers to the south of Algiers, is the site of a unique grouping of sites confined in a restrained area no more than 75 km2. Traces of very early settlement are to be found on the plateau and the rocky slopes bordering this valley which has been ravaged by rare and devastating floods of the wadi. However, the systematic occupation of the land and the adaptation of a strikingly original architecture to a semi-desert site date from the beginning of the 11th century and are the achievement of a group of human beings defined by a religious, social and moral ideal of great preciseness.

The lbadis, whose doctrine attained, in several respects, the intransigent purism of the Kharidjism, dominated a part of the Maghreb during the 10th century. They founded a state whose capital, Tahert, was burned in 909, whereafter they sought out other territorial bases: at Sedrata, and finally in the M’ Zab.

The choice of this valley, inhabited sporadically until then by nomad populations, is explained above all by the defensive possibilities which it offered a community, concerned with its protection and fiercely dedicated to the preservation of its identity, even at the expense of its own isolation.

‘Ihe occupation of the land and the organization of space were inspired by very strict principles; and, in their preciseness and their detail, they are of an exemplary character. Five ksour (fortified villages): El Atteuf, Bou Noura,Beni Isguan, Malika and Ghardaia, located on the rocky outcroppings group together a stationary and essentially urban population. Each of these miniature citadels, encircled by walls, is dominated by a mosque, whose minaret functions as a watch tower. The mosque (with its arsenal and grain stores) is, in fact, conceived as a fortress, the last bastion of resistance in the event of a siege. Around this building, which is essential to communal life, are houses built in concentric circles and set out, up to the fortress walls. Each house, a cubic cell of a standard type, illustrates an egalitarian social organization, based on the respect for the structure of the family, whose intimacy and autonomy its aim was to preserve.

Outside the walls, this egalitarian idea reigns, as well, in the necroples, where, among the non-distinctive graves, only the tombs of sages and the small mosques are distinguishable.

The living pattern of the Ibadis of the M’zab Valley included a seasonal migration. Each summer, the population settled in palm groves, where the “summer cities” were marked by the looser organization of their settlements, the highly defensive nature of the houses, the presence of watch towers and of a mosque without minaret, comparable to those in the cemeteries.

These 3 unchanging elements: the ksar, the cemetery, the palm grove with its summer “citadel”, are found in all 5 villages. They serve to illustrate an example of a traditional human settlement, representative of a culture which has continued into 20th century.

Also, they bear witness, in a most exceptional manner, to the Ibadi culture at its height.

Finally, the settlement of the M’Zab Valley has exerted a considerable influence on architects and city-planners of thbe 20th century, from Le Corbusier to Puiillon.