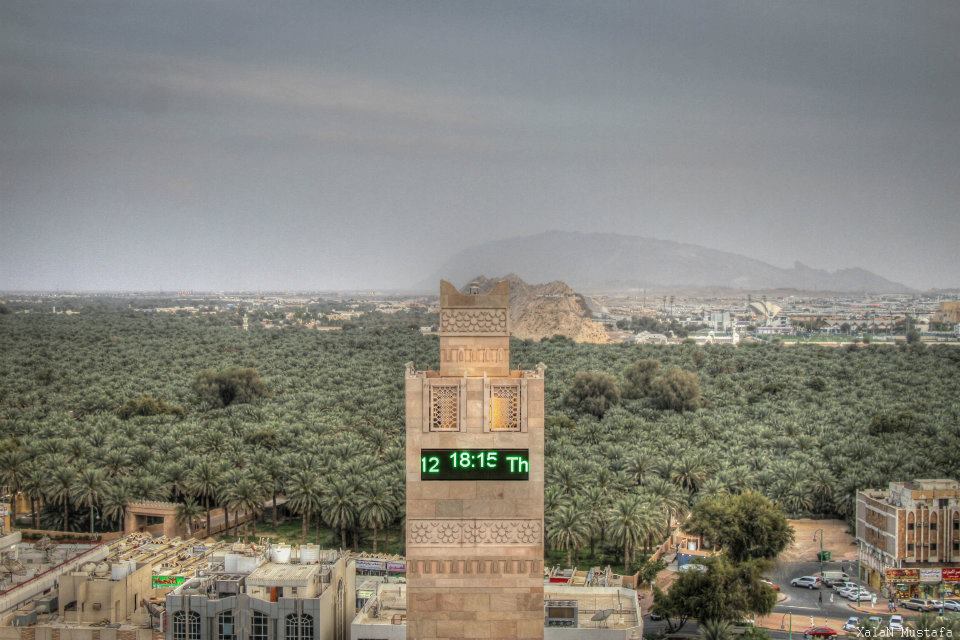 Al Ain, with Sheikh Salama mosque minaret in the foreground and Jabal Hafeet in the background (Xalan Mustafa/Wikimedia,
CC BY-SA 3.0). 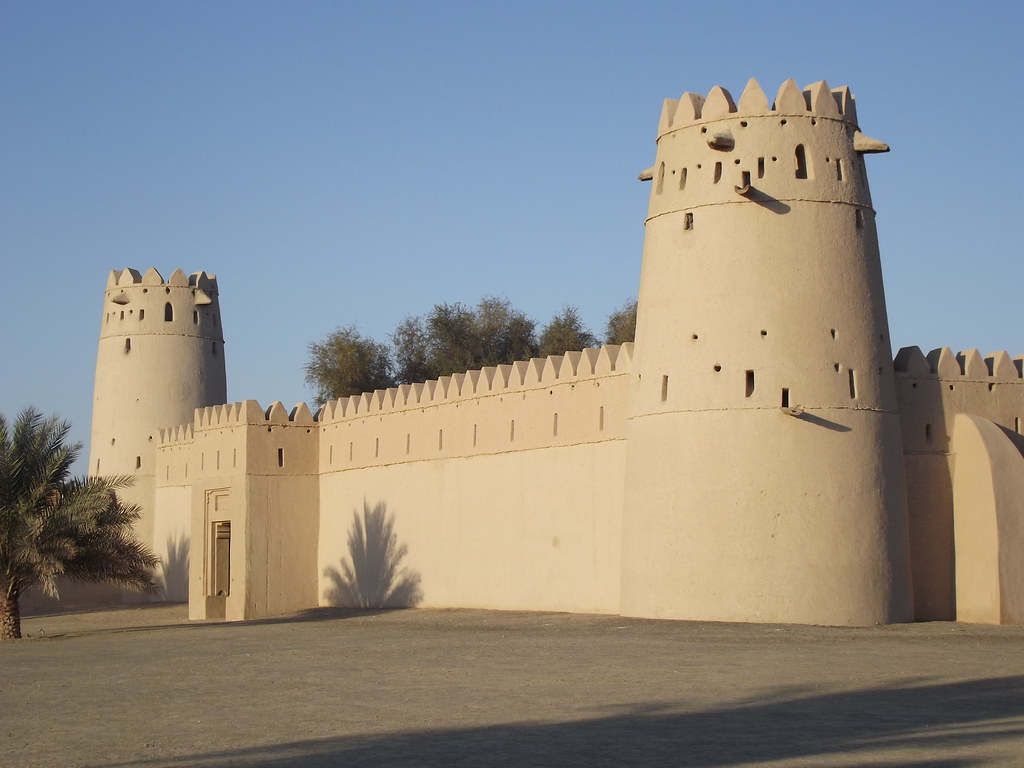 The serial property of The Cultural Sites of Al Ain, with its various component parts and the regional context in which it is situated, provides testimony to ancient sedentary human occupation in a desert region. Occupied continuously since the Neolithic, the region presents vestiges of numerous prehistoric cultures, notably from the Bronze Age and the Iron Age. Al Ain is situated at the crossroads of the ancient land routes between Oman, the Arabian Peninsula, the Persian Gulf and Mesopotamia. Very diverse in nature, the tangible elements of the property include remains of circular stone tombs and settlements from the Hafit and Hili periods, wells and partially underground aflaj irrigation systems, oases and mud brick constructions assigned to a wide range of defensive, domestic and economic purposes. This expertise in construction and water management enabled the early development of agriculture for five millennia, up until the present day.

Criterion (iii):The Cultural Sites of Al Ain provide exceptional testimony to the development of successive prehistoric cultures in a desert region, from the Neolithic to the Iron Age. They establish the existence of sustainable human development, bearing testimony to the transition from hunter and nomad societies to the sedentary human occupation of the oasis, and the sustainability of this culture up until the present day.

Criterion (iv): The tombs and architectural remains of the Hafit, Hili and Umm an‐Nar cultures provide an exceptional illustration of human development in the Bronze Age and the Iron Age on the Arabian Peninsula. The aflaj system, introduced as early as the 1st millennium BC, is testimony to the management of water in desert regions.

Criterion (v): The remains and landscapes of the oases of Al Ain appear to testify, over a very long period of history, to the capacity of the civilizations in the northeast of the Arabian Peninsula, notably in the protohistoric periods, to develop a sustainable and positive relationship with the desert environment. They knew how to establish the sustainable exploitation of water resources to create a green and fertile environment.

Al Ain is the garden city of United Arab Emirates. This oasis town is next to, and virtually merged with, the Omani town of Buraimi. The “Cultural Sites of Al Ain (Hafit, Hili, Bidaa Bint Saud and Oases Areas)” have been inscribed on the UNESCO World Heritage list. Al Ain has several sites that would be of interest to tourists: Jebel Hafeet. The second tallest mountain in the United Arab Emirates (1350 m), Jebel Hafeet is surrounded by flat plains on three sides, which afford spectacular views, especially at sunset. The road to the top winds around hairpin turns for 12 km. There are three rest points for viewing, and then at the very top is a large parking area with a cafeteria and 360-degree view of the entire area. Take care on the road as some drivers enjoy the excitement of the twists and turns too much. There is a hotel… [read more]

Al Madam is an inland town of the Emirate of Sharjah, the UAE. Located at the intersection of the Dubai-Hatta (E44) and Mleiha-Shwaib (E55) roads, its development has mainly centred around these road links and the road traffic through Hatta to Oman. The volume of traffic to Oman through Madam and Hatta has lessened since the closure of the ‘soft’ Omani border at Mahda in 2016, although traffic volumes remain at some 5,000 travellers daily. The road from Madam to Hatta is now only open to UAE or Omani nationals and permit holders. The strip development of Madam along the E44 towards the ‘dune bashing’ tourist centre of Badayer (with its celebrated ‘Big Red’ sand dune) has resulted in the town becoming elongated, and includes the ‘first shopping mall’ to open there. This is in addition to municipal facilities, a medical centre, wedding hall and a large number of shops… [read more]

Dubai is a cosmopolitan metropolis and global city on the Arabian Peninsula. The city is one of the ten most popular tourist destinations in the world. The city is also considered one of the most modern and progressive cities in the Middle East – certainly in the Arab world – and is also sometimes nicknamed as “City of Gold” due to historically being a hub for gold trade as well as the rapid transformation from a desert into a luxurious city. Dubai is characterized by a vast landscape of desert which transforms into a futuristic style of skyscrapers along the coastline. The city offers both insights to the old merchant and pearl diving history of the Arabs in Deira and Bur Dubai and the new modern skyscraper business and bustling life in Jumeirah and Jebel Ali. Dubai is sometimes mistakenly thought of as a country, however it is an Emirate… [read more]