Birthplace of Jesus: Church of the Nativity and the Pilgrimage Route, Bethlehem 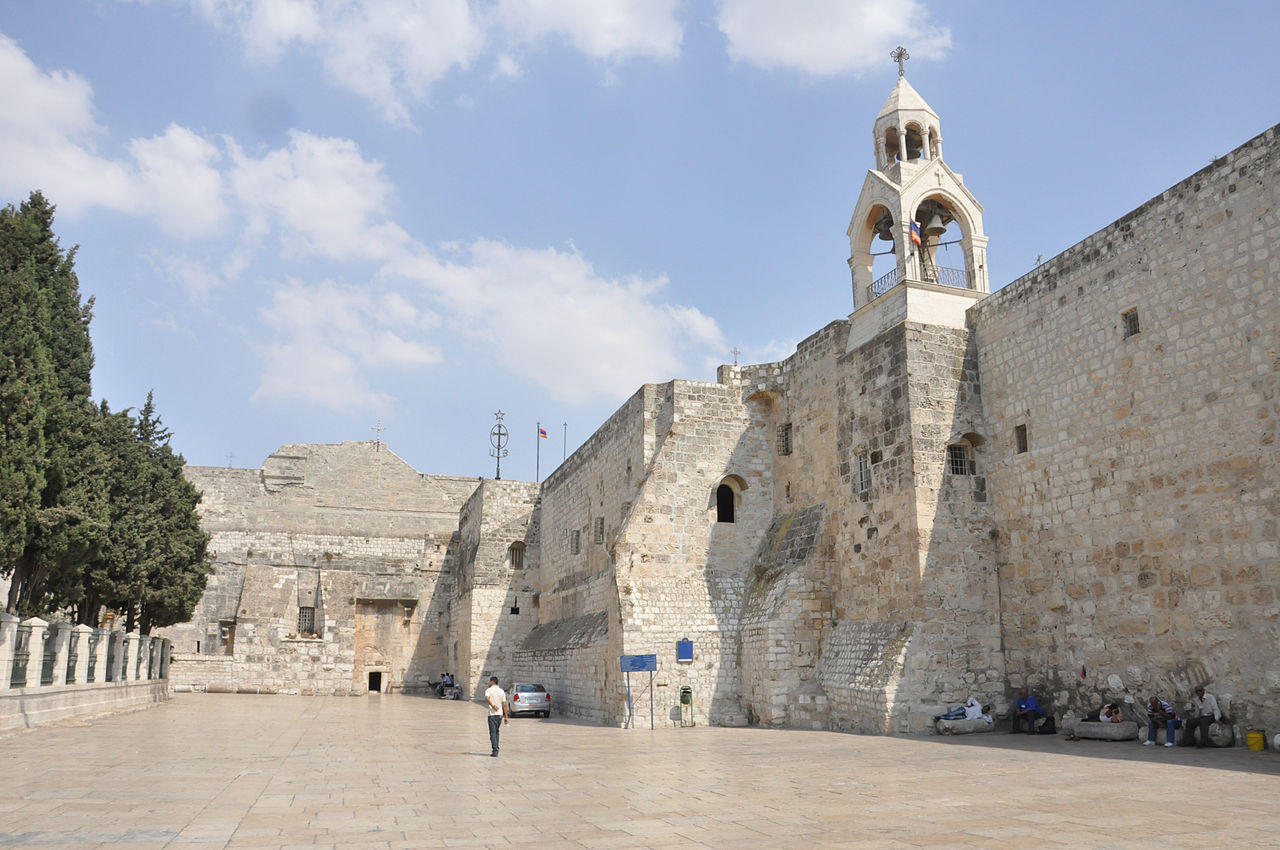 Church of the Nativity (Neil Ward/Wikipedia, CC BY 2.0).

The inscribed property is situated 10 km south of Jerusalem on the site identified by Christian tradition as the birthplace of Jesus since the 2nd century. A church was first completed there in ad 339 and the edifice that replaced it after a fire in the 6th century retains elaborate floor mosaics from the original building. The site also includes Latin, Greek Orthodox, Franciscan and Armenian convents and churches, as well as bell towers, terraced gardens and a pilgrimage route.

Interior of the Church of the Nativity (Zero0000/Wikipedia, Public Domain).

Bethlehem lies 10 kilometres south of the city of Jerusalem, in the fertile limestone hill country of the Holy Land. Since at least the 2nd century AD people have believed that the place where the Church of the Nativity, Bethlehem, now stands is where Jesus was born. One particular cave, over which the first Church was built, is traditionally believed to be the Birthplace itself. In locating the Nativity, the place both marks the beginnings of Christianity and is one of the holiest spots in Christendom. The original basilica church of 339 AD (St Helena), parts of which survive below ground, was arranged so that its octagonal eastern end surrounded, and provided a view of, the cave. This church is overlaid by the present Church of the Nativity, essentially of the mid-6th century AD (Justinian), though with later alterations. It is the oldest Christian church in daily use . Since early medieval times the Church has been increasingly incorporated into a complex of other ecclesiastical buildings, mainly monastic. As a result, today it is embedded in an extraordinary architectural ensemble, overseen by members of the Greek Orthodox Church, the Custody of the Holy Land and the Armenian Church, under the provisions of the Status Quo of the Holy Places established by the Treaty of Berlin (1878).

During various periods over the past 1700 years, Bethlehem and the Church of the Nativity have been, and still are, a pilgrim destination. The eastern end of the traditional route from Jerusalem to the Church, known as the Pilgrimage route, marks the road that connects the traditional entrance of Bethlehem, near King David’s Wells with the Church of the Nativity, and extends along the Star Street through the Damascus Gate, or Qos Al-Zarara, the historical gate of the town, towards the Manger Square. The Route continues to be celebrated as the path followed by Joseph and Mary during their trip in Bethlehem during Christmas ceremonies each year, and is followed ceremonially by Patriarchs of the three churches at their several Christmases, and during their official visits to Bethlehem.

The outstanding universal value of the Church of the Nativity and the Pilgrimage Route, Bethlehem, lies, in its association with the birthplace of the founder of a great religion, which for Believers saw the Son of God made man in Bethlehem.

And for the way the fabric of the Church of the Nativity and its associations have combined to reflect the extraordinary influence of Christianity in spiritual and political terms over 1500 years.

Criterion (vi): The Church of the Nativity, and the Pilgrimage Route to it, are directly associated with the birth of Jesus, an event of outstanding universal significance, through the buildings of which were constructed in the 4th century AD and re-constructed in the 6th century AD. These are a strong symbol for more than 2 billion Christian believers in the world; and are Holy to Christians as well as to Muslims.

Hebron is an ancient city in the southern West Bank. It is the traditional burial place of the Biblical patriarchs Abraham, Isaac, Jacob, and their wives. This makes it a significant religious site for the Abrahamic religions. In 2017, the old town was inscribed on the UNESCO World Heritage List. Hebron is mentioned in the Bible as the home of Abraham, and the burial place of him and several generations of his family. In King David’s time, Hebron was briefly the capital of the Israelite state, before the capital moved to Jerusalem. Today, Hebron is holy to both Muslims and Jews due to its association with Abraham. (Christianity is also an Abrahamic religion, but Christians haven’t paid as much attention to Hebron.) See Cave of the Patriarchs (al Haram al Ibrahimi/Ibrahimi Mosque, Ma’arat HaMachpelah/Machpelah Cave). The main religious site in the city. The cave, where the Patriarchs and their wives are buried, is deep underground [read more].

The Gaza Strip is a Palestinian territory in the Middle East. The largest city is Gaza. Portions of this page, written based on experiences over the last 10 years, may be out of date as experiences from before the Hamas takeover in 2007, open military conflict (27 Dec 2008 – 18 Jan 2009), or the Israeli blockade differ from the current situation on the ground. As of July 2014, a return to military conflict has caused substantial harm in the region, with destruction of property and civilian fatalities, although a ceasefire has been attempted. While relative calm between Israel and Hamas has returned as of 2016, tensions or even outright hostilities may start again without much warning signs basically over night. Positioned between Israel and Egypt, Gaza isn’t quite the pure hellhole you might expect given TV coverage, although this birthplace of the intifada and one of the most densely populated parts of the planet isn’t exactly paradise on earth, either [read more].

The political status of Jerusalem is disputed. While the 1947 partition plan intended Jerusalem, Bethlehem and some surrounding suburbs to become a corpus separatum under international administration, parts of Jerusalem came under the control of Arab and Israeli armies respectively during the Israeli war of independence. In 1967, Israel conquered East Jerusalem and in 1980 the “Jerusalem law” integrated the entire city into Israeli territory from the point of view of Israel. The Palestinian authority variously claims at least east Jerusalem as a (future) capital of a Palestinian state and other actors as well as third parties hold various positions on the issues. From a travel standpoint, East Jerusalem is a part of Jerusalem albeit with some distinguishing features, and visitors will be subject to Israeli laws and visa rules while there. This is not an endorsement of any point of view in the conflict. The ancient city in the Judean Hills has a fascinating history spanning thousands of years [read more].