This Phoenician city, where a triad of deities was worshipped, was known as Heliopolis during the Hellenistic period. It retained its religious function during Roman times, when the sanctuary of the Heliopolitan Jupiter attracted thousands of pilgrims. Baalbek, with its colossal structures, is one of the finest examples of Imperial Roman architecture at its apogee. 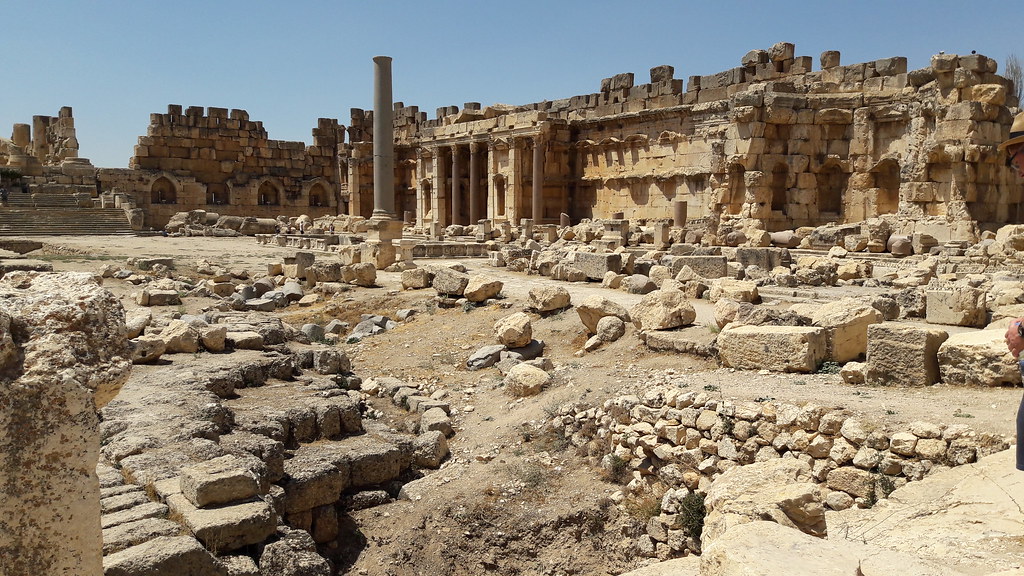 The complex of temples at Baalbek is located at the foot of the south-west slope of Anti-Lebanon, bordering the fertile plain of the Bekaa at an altitude of 1150 m.  The city of Baalbek reached its apogee during Roman times.  Its colossal constructions built over a period of more than two centuries, make it one of the most famous sanctuaries of the Roman world and a model of Imperial Roman architecture. Pilgrims thronged to the sanctuary to venerate the three deities, known under the name of the Romanized Triad of Heliopolis, an essentially Phoenician cult (Jupiter, Venus and Mercury).

The importance of this amalgam of ruins of the Greco-Roman period with even more ancient vestiges of Phoenician tradition, are based on its outstanding artistic and architectural value. The acropolis of Baalbek comprises several temples. The Roman construction was built on top of earlier ruins which were formed into a raised plaza, formed of  twenty-four monoliths, the largest  weighing over 800 tons.

The Temple of Jupiter, principal temple of the Baalbek triad, was remarkable for its 20 m high columns that surrounded the cella, and the gigantic stones of its terrace. The adjacent temple dedicated to Bacchus is exceptional; it is richly and abundantly decorated and of impressive dimensions with its monumental gate sculpted with Bacchic figures. The Round Temple or Temple of Venus differs in its originality of layout as well as its refinement and harmonious forms, in a city where other sanctuaries are marked by monumental structures. The only remaining vestige of the Temple of Mercury located on Cheikh Abdallah Hill, is a stairway carved from the rock. The Odeon, located south of the acropolis in a place known as Boustan el Khan, is also part of the Baalbek site, and considered among the most spectacular archaeological sites of the Near East.

Baalbek became one of the most celebrated sanctuaries of the ancient world, progressively overlaid with colossal constructions which were built during more than two centuries. Its monumental ensemble is one of the most impressive testimonies of the Roman architecture of the imperial period.

Criterion (i): The archaeological site of Baalbek represents a religious complex of outstanding artistic value and its majestic monumental ensemble, with its exquisitely detailed stonework, is a unique artistic creation which reflects the amalgamation of Phoenician beliefs with the gods of the Greco-Roman pantheon through an amazing stylistic metamorphosis.

Criterion (iv): The monumental complex of Baalbek is an outstanding example of a Roman sanctuary and one of the most impressive testimonies to the Roman period at its apogee that displays to the full the power and wealth of the Roman Empire. It contains some of the largest Roman temples ever built, and they are among the best preserved. They reflect an extraordinary amalgamation of Roman architecture with local traditions of planning and layout.

Zahle (or Zahlé) is a city in Lebanon, located 52 km east of Beirut. Zahle is located at an altitude of almost 1000 meters, at the end of the Beqaa Valley [read more].

Beirut (Arabic: Bayrūt, French: Beyrouth) is the capital city of Lebanon with a population of approximately 2.1 million people in its metropolitan area. The city is on a relatively small headland jutting into the east Mediterranean. It is by far the biggest city in Lebanon. Due to Lebanon’s small size, the capital has always held the status as the only true cosmopolitan city in the country, and since independence, has been the commercial and financial hub of Lebanon. Beirut is composed by many different neighborhoods, each own having its own distinctive atmosphere and character. Damascus Road, which connects the center with the National Museum, was known as the “Green Line” during the civil war era (1975–1990). At that time, it separated the mostly Muslim western sector of the city and the Christian eastern sector. Martyrs’ Square and the post-war development of Beirut Central District (BCD) are the geographical pivot of the city and serve quite well for orientation [read more].

Tripoli (Arabic: Trablus) is a city in northern Lebanon. See Old City. The Old City is mainly a Mamluk city. The urban form of Mamluk Tripoli was dictated mainly by climate, site configuration, defense, and urban aesthetics. The layout of major thoroughfares was set according to prevailing winds and topography. The city had no fortifications, but heavy building construction characterized by compact urban forms, narrow and winding streets for difficult city penetration. Residential areas were bridged over streets at strategic points for surveillance and defense. The city also included many loopholes and narrow slits at street junctions. There are old souqs (markets) and khans (caravanserai), hammams (Turkish baths), citadels, great Mamluk mosques and madrassas. A vibrant area of the city, visitors will find an agglomeration of jewelers, perfumers, tanners, soap-makers and tailors within the narrow streets. The city is known for its production of soap,copper and brass trays, engraved wooden boxes, furniture, and oriental sweets [read more].