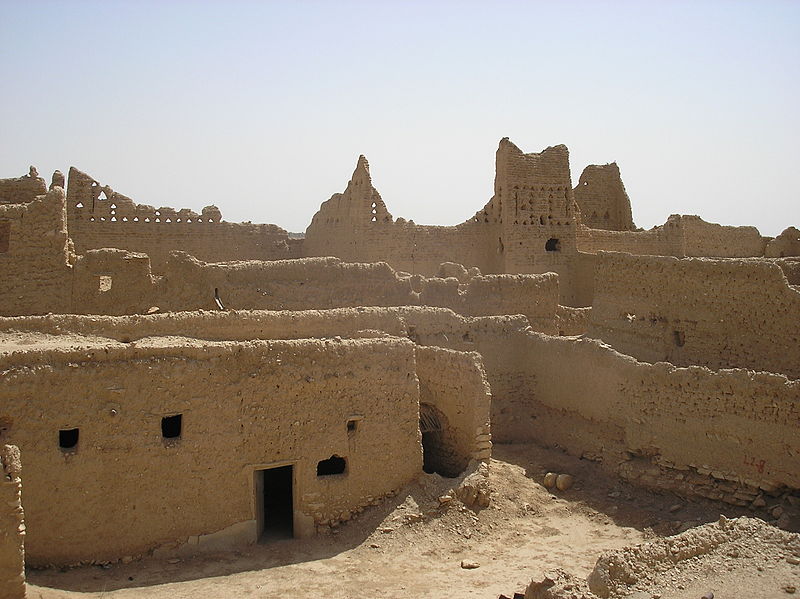 This property was the first capital of the Saudi Dynasty, in the heart of the Arabian Penisula, north-west of Riyadh. Founded in the 15th century, it bears witness to the Najdi architectural style, which is specific to the centre of the Arabian peninsula. In the 18th and early 19th century, its political and religious role increased, and the citadel at at-Turaif became the centre of the temporal power of the House of Saud and the spread of the Salafiyya reform inside the Muslim religion. The property includes the remains of many palaces and an urban ensemble built on the edge of the ad-Dir’iyah oasis.

The At-Turaif District in ad-Dir’iyah was the first capital of the Saudi Dynasty, in the heart of the Arabian Peninsula, north-west of Riyadh. Founded in the 15th century, it bears witness to the Najdi architectural style, which is specific to the centre of the Arabian Peninsula. In the 18th and the early 19th century, its regional political and religious role increased, and the citadel of at-Turaif became the centre of the temporal power of the House of Saud and the spread of the Islamic reform movement in Arabia, Salafiyya. The property includes the remains of many palaces and an urban ensemble built on the edge of the ad-Dir’iyah oasis.

Criterion (iv): The citadel of at-Turaif is representative of a diversified and fortified urban ensemble within an oasis. It comprises many palaces and is an outstanding example of the Najdi architectural and decorative style characteristic of the centre of the Arabian Peninsula.  It bears witness to a building method that is well adapted to its environment, to the use of adobe in major palatial complexes, along with a remarkable sense of geometrical decoration.

Criterion (v): The site of at-Turaif District in ad-Dir’iyah illustrates a significant phase in the human settlement of the central Arabian plateau, when in the mid-18th century Ad-Dir’iyah became the capital of an independent Arab State and an important religious centre. At-Turaif District in Ad-Dir’iyah is an outstanding example of traditional human settlement in a desert environment.

Criterion (vi): The At-Turaif District was the first historic centre with a unifying power in the Arabian Peninsula.  Its influence was greatly strengthened by the teachings of Sheikh Mohammad Bin Abdul Wahhab, a great reformer of Sunni Islam who lived, preached and died in the city. After his enduring alliance with the Saudi Dynasty, in the middle of the 18th century, it is from ad-Dir’iyah that the message of Salafiyya spread throughout the Arabian Peninsula and the Muslim world.

Riyadh is the capital of Saudi Arabia. It is slightly east of the center of the country in the heart of the Tuwaig escarpment. Riyadh is the largest city of the Kingdom of Saudi Arabia. Although many of the common forms of entertainment are limited, there are interesting places that can be visited in Riyadh ranging from historic landmarks to the few towers that highlight the transition of the city with more incorporation of modern technology. For most of the year, the climate is brutally hot, but it is pleasantly moderate during the winter. The only reliable means of transport in Riyadh is a car: you would either depend on cabs or you would have to rent your own car. Generally prices are lower in Riyadh than most other big cities in the world. However, Riyadh is usually a destination that is visited mainly for business. Until the 16th century, Riyadh… [read more].

Al Kharj, also known locally as Al Saih, is a city in Al Kharj Governorate in central Saudi Arabia. Al Kharj is 77 km south of Riyadh. It is connected by rail to both Riyadh and Dammam. The city’s main landmarks includes the historical water wells, and King Abdulaziz Palace and Mosque. Under the leadership of King Abdulaziz, who first took initiative for the production of milk in the kingdom, an experimental farm was established at Al-Kharj in 1938. In 2016, Al-Kharj was a closed city. The state-owned armor manufacturer Military Industries Corporation (MIC) was situated in the city, where the German assault rifle Heckler & Koch G36 was mounted and the matching 5.56mm ammunition produced. [read more]

Al-Muzahmiyya is one of the fastest-growing towns in Riyadh Province, Saudi Arabia. It is located 59 kilometres (37 mi) by road southwest of Riyadh, on the important Riyadh-Mecca Highway. As of the 2004 census it had a population of 24,224 people. It lies in a wide valley known as Wadi Al-Batin, and was founded in the 16th century as a colony of small independent farms and estates that later joined together to form one village. It is currently part of Al-Muzahmiyya Governorate. It’s considered the west gate of the capital city of Saudi Arabia Riyadh Al-Muzahmiyya has become number 1 destination for Riyadh residents due to its convenient location and its great attractions specially during winter season. The city is famous with its nature which combines golden sand dunes which are some of the world’s great natural wonders in one side and the other side of the city is surrounded by… [read more].