Archaeological Sites of the Island of Meroe 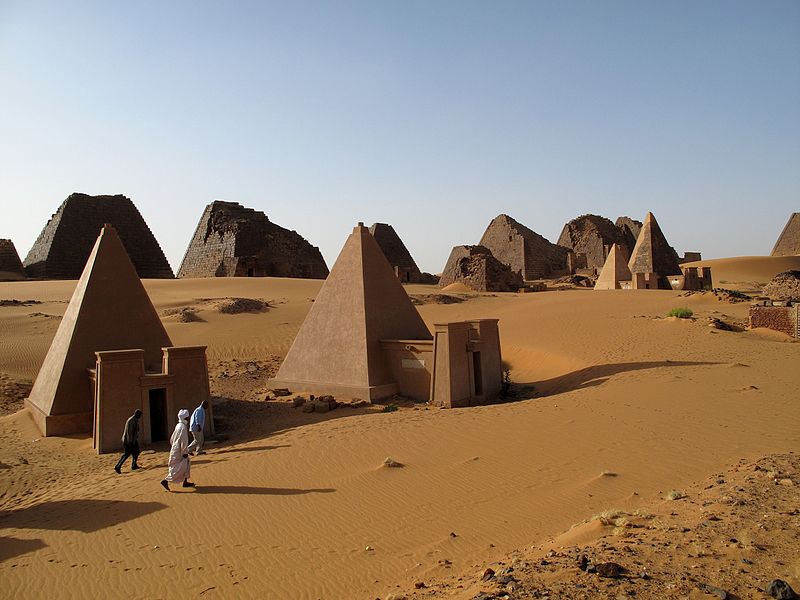 The Archaeological Sites of the Island of Meroe, a semi-desert landscape between the Nile and Atbara rivers, was the heartland of the Kingdom of Kush, a major power from the 8th century B.C. to the 4th century A.D. The property consists of the royal city of the Kushite kings at Meroe, near the River Nile, the nearby religious site of Naqa and Musawwarat es Sufra. It was the seat of the rulers who occupied Egypt for close to a century and features, among other vestiges, pyramids, temples and domestic buildings as well as major installations connected to water management. Their vast empire extended from the Mediterranean to the heart of Africa, and the property testifies to the exchange between the art, architectures, religions and languages of both regions.

The Island of Meroe is the heartland of the Kingdom of Kush, a major power in the ancient world from the 8th century BCE to the 4th century CE. Meroe became the principal residence of the rulers, and from the 3rd century BCE onwards it was the site of most royal burials.

The property consists of three separate site components, Meroe, the capital, which includes the town and cemetery site, and Musawwarat es-Sufra and Naqa, two associated settlements and religious centres. The Meroe cemetery, Musawwarat es-Sufra, and Naqa are located in a semi-desert, set against reddish-brown hills and contrasting with the green bushes that cover them, whilst the Meroe town site is part of a riverine landscape.

These three sites comprise the best preserved relics of the Kingdom of Kush, encompassing a wide range of architectural forms, including pyramids, temples, palaces, and industrial areas that shaped the political, religious, social, artistic and technological scene of the Middle and Northern Nile Valley for more than 1000 years (8th century BC-4th century AD). These architectural structures, the applied iconography and evidence of production and trade, including ceramics and iron-works, testify to the wealth and power of the Kushite State. The water reservoirs in addition contribute to the understanding of the palaeoclimate and hydrological regime in the area in the later centuries BCE and the first few centuries CE.

Criterion (ii): The Archaeological Sites of the Island of Meroe reflect the interchange of ideas and contact between Sub-Saharan Africa and the Mediterranean and Middle Eastern worlds, along a major trade corridor over a very long period of time. The interaction of local and foreign influences is demonstrated by the preserved architectural remains and their iconography.

Criterion (iii): The property with its wide range of monument types, well preserved buildings, and potential for future excavation and research, contributes an exceptional testimony to the wealth and power of the former Kushite state and its extensive contacts with African, Mediterranean and Middle Eastern societies. The Kushite civilization was largely expunged by the arrival of Christianity on the Middle Nile in the 6th century CE.

Criterion (iv):The pyramids at Meroe are outstanding examples of Kushite funerary monuments, which illustrate the association with the well preserved remains of the urban centre of the Kushite capital city, Meroe. The architectural remains at the three site components illustrate the juxtaposition of structural and decorative elements from Pharaonic Egypt, Greece, and Rome as well as from Kush itself, and through this represent a significant reference of early exchange and diffusion of styles and technologies.

Criterion (v): The major centres of human activity far from the Nile at Musawwarat and Naqa raise questions as to their viability in what is today an arid zone devoid of permanent human settlement. They offer the possibility, through a detailed study of the palaeoclimate, flora, and fauna, of understanding the interaction of the Kushites with their desert hinterland.

Atbara is a city of 115,000 inhabitants in Northern Sudan. Due to its links to the railway industry, Atbara is also known as the Railway City. Atbara is a major hub for passenger trains in Sudan. However as of 2021, the only reliable link is with the capital Khartoum which is connected by the daily Nile Express train. Passenger trains from Wadi Halfa, connecting with the ferry from Egypt, are supposed to run once-weekly but cancellations are frequent. The same is true for trains from Port Sudan which runs on an irregular schedule [read more].

Shendi or Shandi is a town in northern Sudan, situated on the east bank of the Nile River 150 km northeast of Khartoum. Shandi is also about 45 km southwest of the ancient city of Meroë. Located in the River Nile wilayah, Shandi is the center of the Ja’aliin tribe and an important historic trading center. Its principal suburb on the west bank is Metemma. A major traditional trade route across the Bayuda Desert connects Metemma to Merowe and Napata, 250 km to the northwest. The town is the historical capital of the powerful Arabised Nubian Ja’alin tribe whom most of its denizens belong to. The village of Hosh Bannaga, where former President Omar al-Bashir’s hometown is, is located on the outskirts of Shendi. The origins and early history of Shendi is unknown. It could have existed in the sixteenth century. It was once the main marketplace of Sudan during the Funj Sultanate until the establishment of Khartoum as Sudan’s capital [read more].

Omdurman is the most populated city in Sudan and Khartoum State, lying on the western banks of the River Nile, opposite the capital, Khartoum. The name Omdurman (Umm Durmān) literally translates as “Mother of Durmān”, but who she was or might have been is not known. After the siege of Khartoum, followed by the building there of the tomb of the Mahdi after his death from typhus, the city grew rapidly. However, in the Battle of Omdurman in 1898 (which actually took place in the nearby village of Kerreri), Lord Kitchener decisively defeated the Mahdist forces and killed Abdallahi ibn Muhammad, the Khalifa, ensuring British control over the Sudan. In September 1898 the British army of twenty thousand well drilled men equipped with the latest arms, Maxim guns and Martini-Henry rifles under the command of General Horatio Herbert Kitchener invaded Sudan. In the battle of Omdurman, the British Army faced Sudanese defenders consisting of over 52,000 poorly armed desert tribesmen dervishes; in the space of five hours the battle was over [read more].