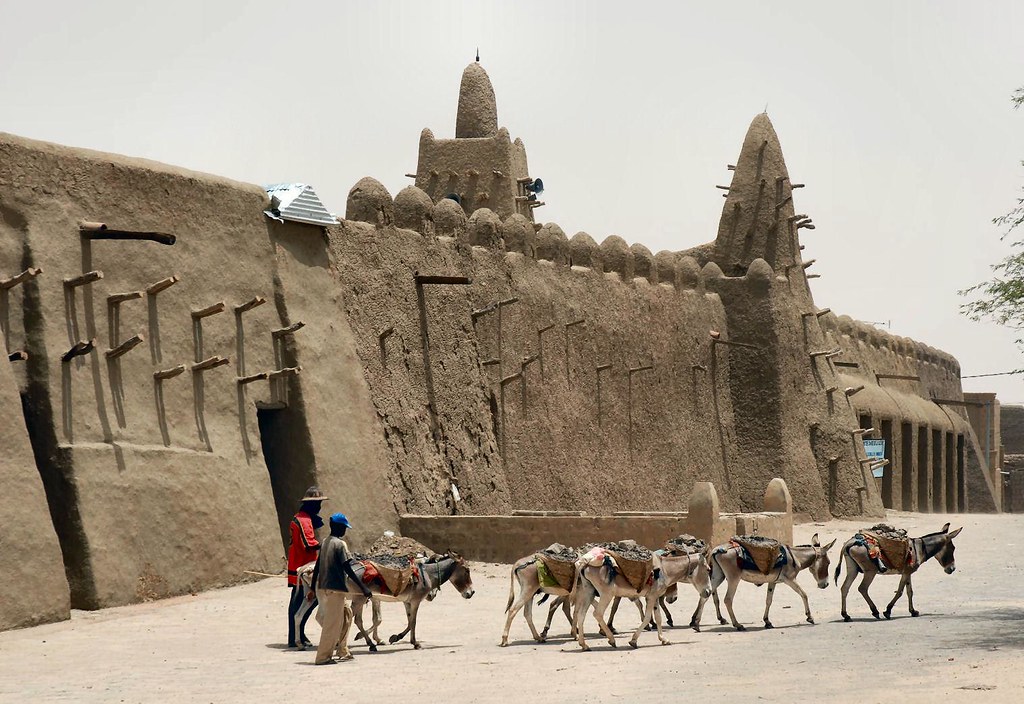 Home of the prestigious Koranic Sankore University and other madrasas, Timbuktu was an intellectual and spiritual capital and a centre for the propagation of Islam throughout Africa in the 15th and 16th centuries. Its three great mosques, Djingareyber, Sankore and Sidi Yahia, recall Timbuktu’s golden age. Although continuously restored, these monuments are today under threat from desertification. 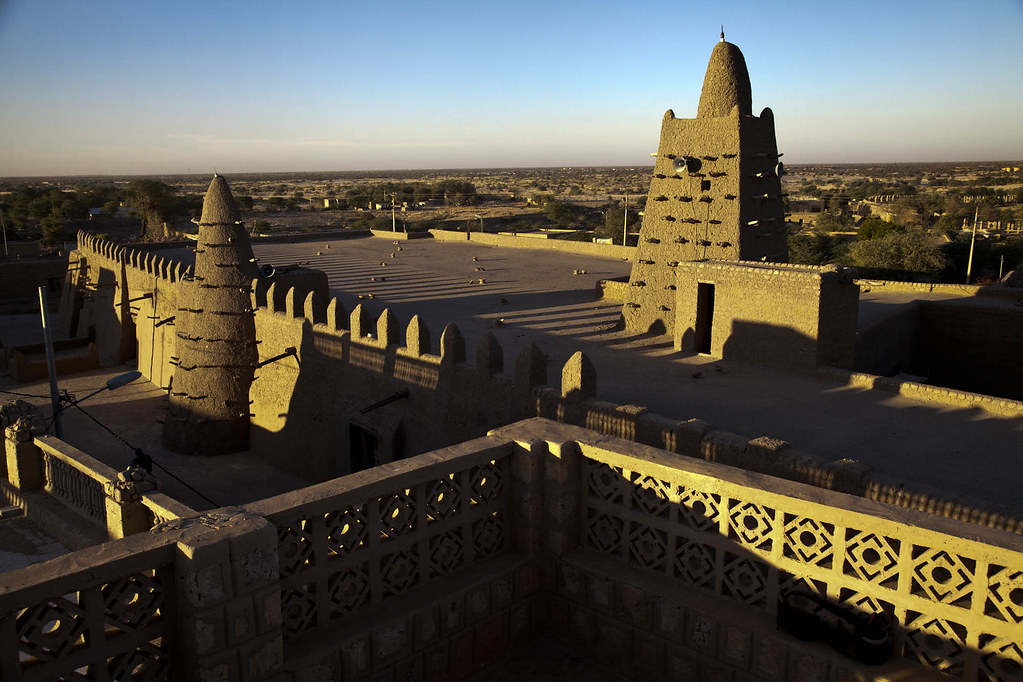 Located at the gateway to the Sahara desert, within the confines of the fertile zone of the Sudan  and in an exceptionally  propitious site near to the river, Timbuktu is one of the cities of Africa whose name is the most heavily charged with history.

Founded in the 5th century, the economic and cultural apogee of Timbuktu came about during the15th and 16th centuries. It was an important centre for the diffusion of Islamic culture with the University of Sankore, with 180 Koranic schools and 25,000 students. It was also a crossroads and an important market place where the trading of manuscripts was negotiated,  and salt from Teghaza in the north, gold was sold, and cattle and grain from the south.

The Djingareyber Mosque, the initial construction of which dates back to Sultan Kankan Moussa, returning from a pilgrimage to Mecca, was rebuilt and enlarged between 1570 and 1583 by the Imam Al Aqib, the Qadi of Timbuktu, who added all the southern part and the wall surrounding the cemetery located to the west. The central minaret dominates the city and is one of the most visible landmarks of the urban landscape of Timbuktu.

Built in the 14th century, the Sankore Mosque was, like the Djingareyber Mosque, restored by the Imam Al Aqib between 1578 and 1582. He had the sanctuary demolished and rebuilt according to the dimensions of the Kaaba of the Mecca.

The Sidi Yahia Mosque, to the south of the Sankore Mosque, was built around 1400 by the marabout Sheik El Moktar Hamalla in anticipation of a holy man who appeared forty years later in the person of Cherif Sidi Yahia, who was then chosen as Imam. The mosque was restored in 1577-1578 by the Imam Al Aqib.

The three big Mosques of Djingareyber, Sankore and Sidi Yahia, sixteen mausoleums and holy public places, still bear witness to this prestigious past. The mosques are exceptional examples of earthen architecture and of traditional maintenance techniques, which continue to the present time.

Criterion (ii): The mosques and holy places of Timbuktu have played an essential role in the spread of Islam in Africa at an early period.

Criterion (iv): The three great mosques of Timbuktu, restored by the Qadi Al Aqib in the 16th century, bear witness to the golden age of the intellectual and spiritual capital at the end of the Askia dynasty.

Criterion (v): The three mosques and mausoleums are outstanding witnesses to the urban establishment of Timbuktu, its important role of commercial, spiritual and cultural centre on the southern trans-Saharan trading route, and its traditional characteristic construction techniques. Their environment has now become very vulnerable under the impact of irreversible change.

Timbuktu (also Tombouctou or Timbuctu) is a Tuareg city on the Niger River in the country of Mali. Its long history as a trading outpost that linked black Africa below the Sahara Desert with Berber and Islamic traders throughout north Africa, and thereby indirectly with traders from Europe, has given it a fabled status. Combined with its relative inaccessibility, “Timbuktu” has come to be used as a metaphor for exotic, distant lands. Today, Timbuktu is an impoverished town, although its reputation makes it a tourist attraction, and it has an airport. It is one of the eight regions of Mali, home to the local governor. It is the sister city to Djenne (also in Mali). Timbuktu is a UNESCO World Heritage Site since 1988. In 1990, it was added to the list of world heritage sites in danger, due to the threat of desert sands. A program was set up to preserve the site and in 2005, it was taken off the list of endangered sites only to suffer immeasurable damage at the hands of Islamist militants in 2012 and early 2013, destroying an undetermined amount of the area’s cultural heritage [read more].

Diré is a town and commune on the left bank of the Niger River in the Tombouctou Region of Mali. In the 2009 census the population of the commune was 22,365.[2] The town is the administrative center of the Diré Cercle. There are several languages spoken, but the main language is Songhay. The population is predominantly Muslim. Situated on the Niger River, the principal industries are agriculture and commerce [read more].