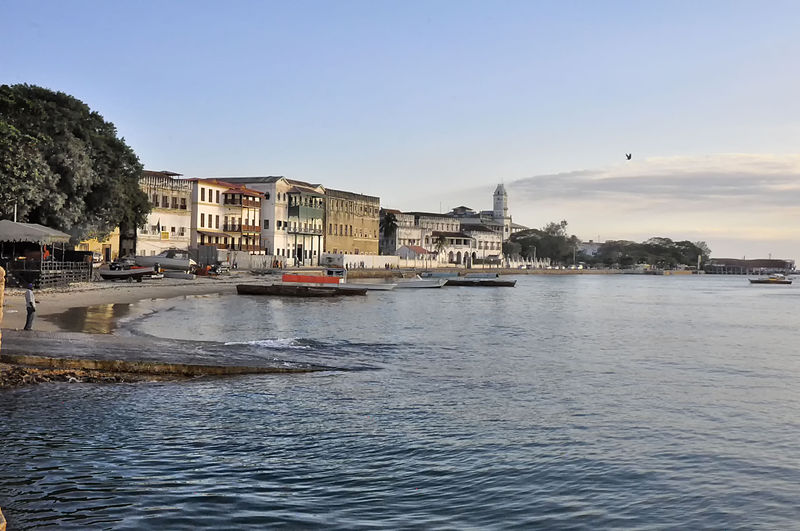 The Stone Town of Zanzibar is a fine example of the Swahili coastal trading towns of East Africa. It retains its urban fabric and townscape virtually intact and contains many fine buildings that reflect its particular culture, which has brought together and homogenized disparate elements of the cultures of Africa, the Arab region, India, and Europe over more than a millennium.

Located on a promontory jutting out from the western side of Unguja island into the Indian Ocean, the Stone Town of Zanzibar is an outstanding example of a Swahili trading town. This type of town developed on the coast of East Africa, further expanded   under Arab, Indian, and European influences, but retained its indigenous elements, to form an urban cultural unit unique to this region.

The Stone Town of Zanzibar retains its urban fabric and townscape virtually intact and contains many fine buildings that reflect its particular culture, which has brought together and homogenized disparate elements of the cultures of Africa, the Arab region, India, and Europe over more than a millennium.

The buildings of the Stone Town, executed principally in coralline ragstone and mangrove timber, set in a thick lime mortar and then plastered and lime-washed, reflect a complex fusion of Swahili, Indian, Arab and European influences in building traditions and town planning. The two storey houses with long narrow rooms disposed round an open courtyard, reached through a narrow corridor, are distinguished externally by elaborately carved double ‘Zanzibar’ doors, and some by wide vernadahs, and by richly decorated interiors. Together with, the simple ground floor Swahili houses and the narrow façade Indian shops along “bazaar” streets constructed around a commercial space “duka”.

The major buildings date from the 18th and 19th centuries and include monuments such as the Old Fort, built on the site of an earlier Portuguese church; the house of wonder, a large ceremonial  palace built by Sultan Barghash; the Old Dispensary; St. Joseph’s Roman Catholic Cathedral; Christ Church Anglican Cathedral commemorating the work of David Livingston in abolishing the slave trade and built on the site of the last slave market; the residence of the slave trader Tippu Tip; the Malindi Bamnara Mosque; the Jamat Khan built for the Ismaili sect; the Royal Cemetery; the Hamamni and other Persian baths. Together with the narrow, winding street pattern, large mansions facing the seafront and open spaces these buildings form an exceptional urban settlement reflecting the longstanding trading activity between the African and Asian seaboards. In particular the Stone town’s is also marked by being the site where slave-trading was finally terminated.

Criterion (ii): The Stone Town of Zanzibar is an outstanding material manifestation of cultural fusion and harmonization.

Criterion (iii): For many centuries there was intense seaborne trading activity between Asia and Africa, and this is illustrated in an exceptional manner by the architecture and urban structure of the Stone Town.

Criterion (vi): Zanzibar has great symbolic importance in the suppression of slavery, since it was one of the main slave-trading ports in East Africa and also the base from which its opponents, such as David Livingstone, conducted their campaign.

Stone Town is the main city on Zanzibar. It is a city of prominent historical and artistic importance in East Africa. Its architecture, mostly dating back to the 19th century, reflects the diverse influences underlying the Swahili culture, with a unique mixture of Moorish, Arab, Persian, Indian and European elements. For this reason, the town was added to the UNESCO World Heritage List in 2000. Do roam around Stone Town appreciating the Historical buildings Be certain to have dinner on the wharf near Blue’s Restaurant in Stone Town. Every evening, for just a few dollars, you can sample local fish, food, drinks, and hear local music. Visit Forodhani Gardens If you are not scared of local food, then this place is definitely worth a visit. It is possibly the cheapest food you will find on the island, and value for money too. Ranging from crab claws, calamari steaks to plain old chips done in big woks [read more].

Dar es Salaam (Haven of Peace in Arabic) was founded in 1862 by Sultan Seyyid Majid of Zanzibar on the site of the village of Mzizima. Mzizima’s history dates back to when the Barawa people started to settle and cultivate the area around Mbwa Maji, Magogoni, Mjimwema, Gezaulole, and Kibonde Maji Mbagara. Dar es Salaam’s origins have been influenced by a myriad of Sultans, the Germans, and the British. The city started as a fishing village in the mid-19th century, is now Tanzania’s largest city, and has become one of East Africa’s most important ports and trading centres. With its great atmosphere, mix of African, Muslim, and South Asian influences, picturesque harbour, beaches, chaotic markets, and historical buildings, it is well worth extending your stay beyond the time between flights. Dar es Salaam is Tanzania’s financial and political hub despite having lost its status as the capital to Dodoma in 1973. It’s often a necessary stop on their way to Zanzibar, the northern safari circuit or home, but Dar has its charm [read more].

Morogoro is a city in the Central Tanzania region of Tanzania. There are old German buildings in the city from the colonial period. The city is at the base of the Ulughuru Mountains, which makes it an ideal base for hikers and campers. Morogoro is the administrative capital of Morogoro Region. It is at least two and a half hours’ drive from Dar es Salaam on a tarmac road. There is air service from Dar es Salaam to Morogoro provided by Auric Air. The schedule is not daily, however, so check their website for availability. Booking and payment can be made online. The Morogoro ‘airport’ is a grass airstrip in the Kihonda area. See Hindu Temple, Railway Rd. Beautiful Hindu temple. Having nice prayers with Prasadam on every Saturday. The main market is off University road. It’s massive: best to get your bearings before entering [read more].