The most saline of Africa’s large lakes, Turkana is an outstanding laboratory for the study of plant and animal communities. The three National Parks serve as a stopover for migrant waterfowl and are major breeding grounds for the Nile crocodile, hippopotamus and a variety of venomous snakes. The Koobi Fora deposits, rich in mammalian, molluscan and other fossil remains, have contributed more to the understanding of paleo-environments than any other site on the continent. 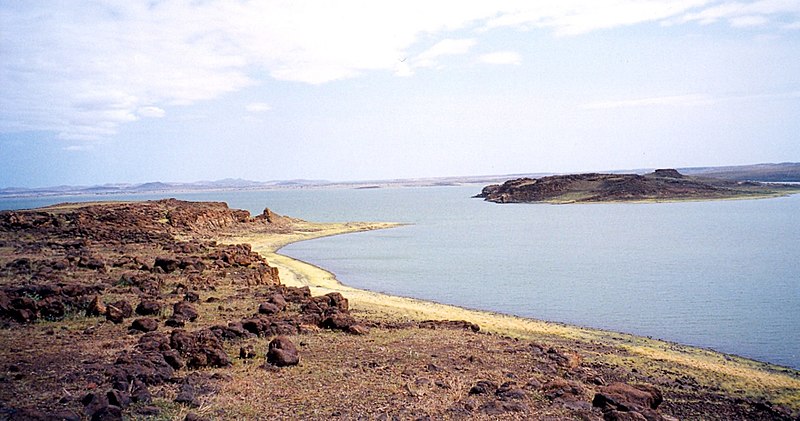 Lake Turkana National Parks are constituted of Sibiloi National Park, the South Island and the Central Island National Parks, covering a total area of 161,485 hectares located within the Lake Turkana basin whose total surface area is 7 million ha. The Lake is the most saline lake in East Africa and the largest desert lake in the world, surrounded by an arid, seemingly extraterrestrial landscape that is often devoid of life. The long body of Lake Turkana drops down along the Rift Valley from the Ethiopian border, extending 249 kilometers from north to south and 44 km at its widest point with a depth of 30 meters. It is Africa’s fourth largest lake, fondly called the Jade Sea because of its breathtaking color.

The property represents unique geo-morphological features with fossil deposits on sedimentary formations as well as one hundred identified archaeological and paleontological sites. There are numerous volcanic overflows with petrified forests. The existing ecological conditions provide habitats for maintaining diverse flora and fauna.

At Kobi Fora to the north of Allia Bay, extensive paleontological finds have been made, starting in 1969, with the discovery of Paranthropus boisei. The discovery of Homo habilis thereafter is evidence of the existence of a relatively intelligent hominid two million years ago and reflect the change in climate from moist forest grassland when the now petrified forest were growing to the present hot desert. The human and pre-human fossils include the remains of five species, Austrolophithecus anamensis, Homo habilis/rudolfensis, Paranthropus boisei, Homo erectus and Homo sapiens all found within one locality. These discoveries are important for understanding the evolutionary history of the human species.

The island parks are the breeding habitats of the Nile crocodile Crocodylus niloticus, the hippopotamus amphibious and several snake species. The lake is an important flyway passage and stopover for palaeartic migrant birds.

Criterion (viii): The geology and fossil record represents major stages of earth history including records of life represented by hominid discoveries, presence of recent geological process represented by volcanic erosional and sedimentary land forms. This property’s main geological features stem from the Pliocene and Holocene periods (4million to 10,000 years old). It has been very valuable in the reconstruction of the paleo-environment of the entire Lake Turkana Basin. The Kobi Fora deposits contain pre-human, mammalian, molluscan and other fossil remains and have contributed more to the understanding of human ancestry and paleo-environment than any other site in the world.

Criterion (x): The property features diverse habitats resulting from ecological changes over time and ranging from terrestrial and aquatic, desert to grasslands and is inhabited by diverse fauna. In situ conservation within the protected areas includes threatened species particularly the reticulated giraffe, lions and gravy zebras and has over 350 recorded species of aquatic and terrestrial birds. The island parks are the breeding habitats of the Nile crocodile, Crocodylus niloticus, the hippopotamus amphibious and several snake species. Furthermore, the lake is an important flyway passage and stopover for palaeartic migrant birds, with the South Island Park also being designated as an important bird area under Birdlife International. The protected area around Lake Turkana provides a large and valuable laboratory for the study of plant and animal communities.

Lowarengak is a town in northern Kenya, near the Kenyan-Ethiopian border. Lowarengak lies on the northwestern margin of Lake Turkana, between the towns of Todenyang to the north, and Nachukui to the south. The town receives fresh water from the Lowarengak and Nakitokonon rivers that drain from the Lapur hills. Both Turkana and Merile pastoralists live in the region. In 1983, longstanding peace was broken when young warriors on both sides began killing one another. As a result, pastoralists in Lapur were unable to reach the lake with their animals, and by 1992 a mass movement of people from Lapur and Todenyang increased the population of Lowarengak by over 30,000. Another cause of flight to Lowarengak included severe drought. Many of the inhabitants who had previously raised livestock became fisherman in order to continue earning a living. Some who lived in Lowarengak later moved to Natole, continuing to flee the northern areas due to raids and pastoral conflict [read more].

Lodwar is the capital of the Turkana District in the Northern Rift Valley region of Kenya. Flights are available from Wilson Airport in Nairobi. Charter aircraft can be hired in advance for drop-off and pick-up at the landing strip near center of town. Fly-540 operates daily flights from Jomo Kenyatta Airport. You can book online or at the airport. Lodwar only has an airstrip, no airport. There is no train service at Lodwar. From Nairobi to Kitale (which is the transit point to Lodwar ) is about 6 to 8 hours and the road conditions are not bad. From Kitale to Lodwar, most of the tarmac roads have either been swept awayby seasonal river or have deteroriated due to neglect. Don’t drive to Lodwar unless you have a landcruiser or something close to that. After Kapenguria (a small town) there are very few villages and if your​ car breaks down you will have to wait for days [read more].

Kakuma is a town in northwestern Turkana County, Kenya. It is the site of a UNHCR refugee camp, established in 1992. The population of Kakuma town was 60,000 in 2014, having grown from around 8,000 in 1990. In 1991, the camp was established to host unaccompanied minors who had fled the war in Sudan and from camps in Ethiopia. Kakuma is situated in the second poorest region in Kenya and as a result of this poverty, there are ongoing tensions between the refugees and the local community that has occasionally resulted in violence. Compared to the wider region, the Kakuma camp has better health facilities and a higher percentage of children in full-time education, which resulted in a general notion that the refugees were better off than the locals. The host community is composed largely of nomadic pastoralists who stick to their traditions and don’t co-operate with refugees. Camp is becoming a normal part of the regional socio-economic landscape and a part of livelihood options available in the region [read more].