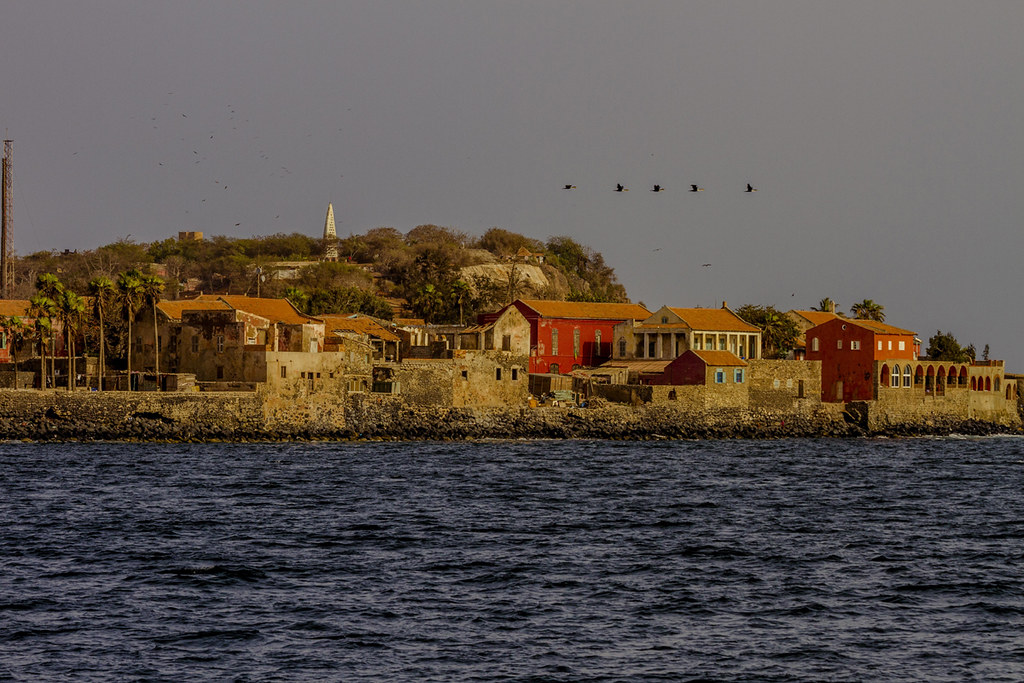 The island of Gorée lies off the coast of Senegal, opposite Dakar. From the 15th to the 19th century, it was the largest slave-trading centre on the African coast. Ruled in succession by the Portuguese, Dutch, English and French, its architecture is characterized by the contrast between the grim slave-quarters and the elegant houses of the slave traders. Today it continues to serve as a reminder of human exploitation and as a sanctuary for reconciliation.

The Island of Gorée testifies to an unprecedented human experience in the history of humanity. Indeed, for the universal conscience, this “memory island” is the symbol of the slave trade with its cortege of suffering, tears and death.
The painful memories of the Atlantic slave trade are crystallized in this small island of 28 hectares lying 3.5 km off the coast from Dakar. Gorée owes its singular destiny to the extreme centrality of its geographical position between the North and the South, and to its excellent strategic position offering a safe haven for anchoring ships, hence the name “Good Rade”.  Thus, since the 15th century it has been prized by various European nations that have successively used it as a stopover or slave market.  First terminus of the “homeoducs” who drained the slaves from the hinterland, Gorée was at the centre of the rivalry between European nations for control of the slave trade.  Until the abolition of the trade in the French colonies, the Island was a warehouse consisting of over a dozen slave houses.  Amongst the tangible elements that reflect Gorée’s universal value are, notably, the Castle, a rocky plateau covered with fortifications which dominate the Island; the Relais de l’Espadon, former residence of the French governor; etc…

The Island of Gorée is now a pilgrimage destination for the African diaspora, a foyer for contact between the West and Africa, and a space for exchange and dialogue between cultures through the confrontation of ideals of reconciliation and forgiveness.

Criterion (vi): The Island of Goree is an exceptional testimony to one of the greatest tragedies in the history of human societies:  the slave trade.  The various elements of this “memory island” – fortresses, buildings, streets, squares, etc. – recount, each in its own way, the history of Gorée which, from the 15th to the 19th century, was the largest slave-trading centre of the African coast.

Dakar is the capital and largest city of Senegal and is often regarded as the cultural and commercial center of French-speaking West Africa. The metropolitan area is home to about 2.4 million people and lies on the end of the Cap Verte peninsula, which marks the westernmost point on the African mainland. Dakar is often the first stop in exploring French-speaking West Africa because it has good flight connections with Western Europe, whereas the other main French-speaking West African city, Abidjan, does not. The Senegalese are very proud of their reputation for “teranga”—hospitality. Locals are extremely friendly and helpful, but as you would anywhere else, watch out for scams and pickpockets. Petty crime here is relatively high, be cautious. The peninsula was settled by the Lebou people, closely related to the Wolof people, when the Portuguese first reached it in 1444. The original villages: Ouakam, Ngor, Yoff and Hann, still constitute distinctively Lebou neighborhoods of the city today [read more].

Pikine is a city in the Pikine Department of the Dakar Region of Senegal. Lying to the east of Dakar city centre, at the 2013 Census it had a population of 1,170,791. The department includes the villages of Yeumbeul, Thiaroye, Mbao, and Keur Massar Malika. Until the mid-2000s, it also included Guédiawaye, which now forms a separate Department. The city was founded in 1952 by the colonial government for former residents of Dakar who were relocated for new developments. This original city is now known as “Old Pikine”, while an informal community has grown up around it. The Grande Niaye de Pikine, a green area known for market gardening, lies to the north west of Pikine [read more].

Touba is in Central Senegal. Touba is the destination for the Grand Magal, an annual religious pilgrimage observed by Mouride Brotherhood, one of the four Islamic Sufi orders (tariqa) in Senegal. Annually, up to three million people participate in pilgrimage [read more].