The ongoing fluvial, marine and aeolian processes in the site have produced a variety of landforms, including coral reefs, long sandy beaches, coastal dunes, lake systems, swamps, and extensive reed and papyrus wetlands. The interplay of the park’s environmental heterogeneity with major floods and coastal storms and a transitional geographic location between subtropical and tropical Africa has resulted in exceptional species diversity and ongoing speciation. The mosaic of landforms and habitat types creates breathtaking scenic vistas. The site contains critical habitats for a range of species from Africa’s marine, wetland and savannah environments. 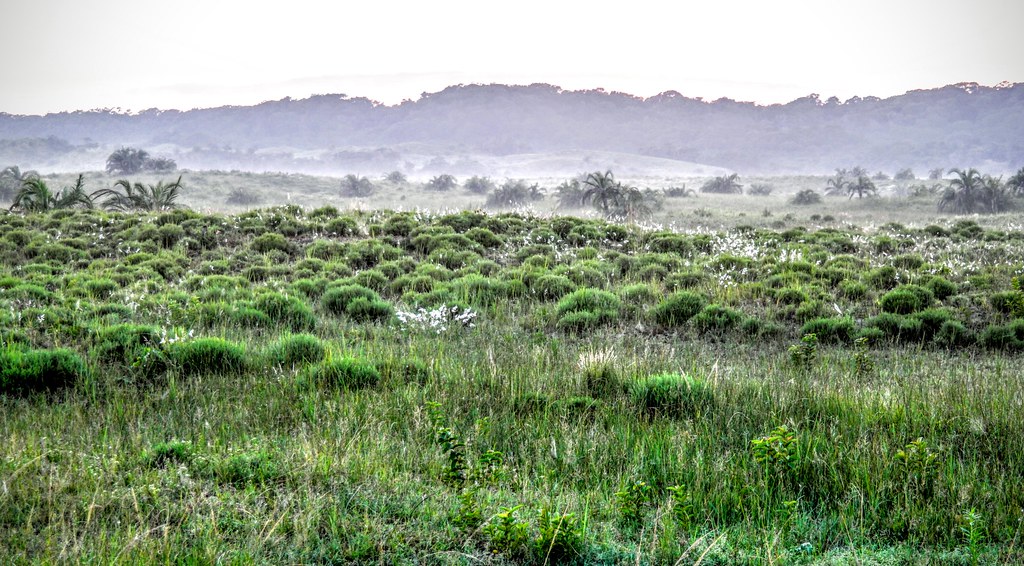 The iSimangaliso Wetland Park is one of the outstanding natural wetland and coastal sites of Africa. Covering an area of 239,566 ha, it includes a wide range of pristine marine, coastal, wetland, estuarine, and terrestrial environments which are scenically beautiful and basically unmodified by people. These include coral reefs, long sandy beaches, coastal dunes, lake systems, swamps, and extensive reed and papyrus wetlands, providing critical habitat for a wide range of species from Africa’s seas, wetlands and savannahs. The interaction of these environments with major floods and coastal storms in the Park’s transitional location has resulted in continuing speciation and exceptional species diversity. Its vivid natural spectacles include nesting turtles and large aggregations of flamingos and other waterfowl.

Criterion (vii): iSimangaliso is geographically diverse with superlative scenic vistas along its 220 km coast. From the clear waters of the Indian Ocean, wide undeveloped sandy beaches, a forested dune cordon and a mosaic of wetlands, grasslands, forests, lakes and savannah, the park contains exceptional aesthetic qualities. Three natural phenomena are judged outstanding. One is the shifting salinity states within Lake St. Lucia which are linked to wet and dry climatic cycles, with the lake responding accordingly with shifts from low to hyper-saline states. A second is the spectacle of large numbers of nesting turtles on the beaches and the abundance of dolphins and migration of whales and whale sharks off-shore. Finally, the huge numbers of waterfowl and large breeding colonies of pelicans, storks, herons and terns are impressive and add life to the wild natural landscape of the area.

Criterion (ix): The combination of fluvial, marine and aeolian processes initiated in the early Pleistocene in iSimangaliso has resulted in a variety of landforms and continues to the present day. The Park’s transitional geographic location between sub-tropical and tropical Africa as well as the coastal setting have resulted in exceptional species diversity. Past speciation events in the Maputaland Centre of Endemism are also ongoing and contribute another element to the diversity and interplay of evolutionary processes at work in iSimangaliso. In the marine component of the site, the sediments being transported by the Agulhas current are trapped by submarine canyons on the continental shelf allowing for remarkably clear waters for the development of coral reefs. The interplay of this environmental heterogeneity is further complicated by major floods and coastal storms, events which are regularly experienced in iSimangaliso. The site is also of sufficient size and retains most of the key elements that are essential for long-term functioning of the ecosystems.

Criterion (x): The five interlinked ecosystems found in iSimangaliso provide habitat for a significant diversity of African biota, including a large number of threatened and/or endemic species. The species lists for iSimangaliso are the lengthiest in the region and population sizes for most of them are viable. Of the over 6,500 plant and animal (including 521 bird) species recorded from the Park[1], populations of species of conservation importance include 11 species endemic to the park, 108 species endemic to South Africa, while 467 species are listed as threatened in South Africa. The outstanding diversity of habitats (terrestrial, wetland, coastal and aquatic) supports a wide variety of animal species, some at the northern and many at the southern limit of their range.

Mkuze, also named Mkhuze or uMkhuze is a small town in Northern KwaZulu-Natal, South Africa. It is located approximately 350 km from the city of Durban. It is along the N2 road en route to Johannesburg, Eswatini and Mozambique; between the Mkuze River and Intaba Yemikhovu (Ghost Mountain). Mkuze is some distance from other small towns such as Hluhluwe (50 km), Nongoma (76 km), Pongola (65 km), and Jozini (25 km). Mkuze is the seat of Umkhanyakude District Municipality. About 50,000 people reside in the small town of Mkuze. As part of the KwaZulu-Natal province, the two official languages of Mkuze (which means “Chorus master” in isiZulu) are Zulu and English. Mkuze Game Reserve has a large variety of natural habitats: from the eastern slopes of the Lebombo Mountains along its eastern boundary, to broad stretches of acacia savannah, swamps and a variety of woodlands and riverine forest. A rare type of sand forest also occurs in the reserve [read more].

Richards Bay is a city of 57,000 people (2011) in KwaZulu-Natal. It is a gateway to Zululand, and an area popular with foreign tourists because of its large game parks and the diverse wildlife on offer. It is also a destination for watersport enthusiasts. ichards Bay is a lagoon of the Mhlatuze River. It is one of the country’s largest harbours, and is the deepest natural harbour on the African continent. The town is surrounded by natural lakes and marshes, making it a picturesque place. The lagoon allows for many different watersports. There is a golf course that is home to hippos, crocodiles, fish eagles, and monkeys, which make for unusual challenges. Watch whales and humpback dolphins from the viewing platform at Alkantstrand Beach. The Enseleni Nature Reserve is home to wildebeest, reedbuck, and zebra, and has hiking trails [read more].

Ulundi, also known as Mahlabathini, is a town in the Zululand District Municipality. At one time the capital of Zulu Kingdom in South Africa and later the capital of the Bantustan of KwaZulu, Ulundi now lies in KwaZulu-Natal Province (of which, from 1994 to 2004, it alternated with Pietermaritzburg as the provincial capital). The town now includes Ulundi Airport, a three-star hotel, and some museums amongst its sights. In the 2001 Census, the population of the town was recorded as 18,420. When Cetshwayo became king of the Zulus on 1 September 1873, he created, as was customary, a new capital for the nation, naming it “Ulundi” (“The high place”). On 4 July 1879, in the Battle of Ulundi (the final battle of the Anglo-Zulu War), the British Army captured the royal kraal and razed it to the ground. Nearby is Ondini, where King Mpande, Cetshwayo’s father, had his kraal. A large Zulu hut now is on the site [read more].