The serene island of Texel has had a rich, dynamic and turbulent history, which includes a brush with the American Revolution and the location of WWII’s last battlefield. Now it’s a paradise for hikers, cyclists, horseback riders, artists and sheep. Texel has something for everyone, from historians and nature lovers to sheep and birdwatchers. It…

AFTER a high speed rib boat ride across the Wadden Sea off the north coast of the Netherlands, the skipper suddenly cuts the engine and says:…

Source: Travel: A trip to the beautiful Wadden Sea UNESCO World Heritage Site in the Netherlands

If you really want an idyllic island escape, Europe is full of small, lesser-known islands that can offer the tranquility and relaxation you’re seeking.

Source: Gorgeous European Islands You Should Visit This Summer

The Afsluitdijk Wadden Center is a museum and a visitor center in Kornwerderzand, a settlement on the Afsluitdijk causeway in the northern Netherlands… 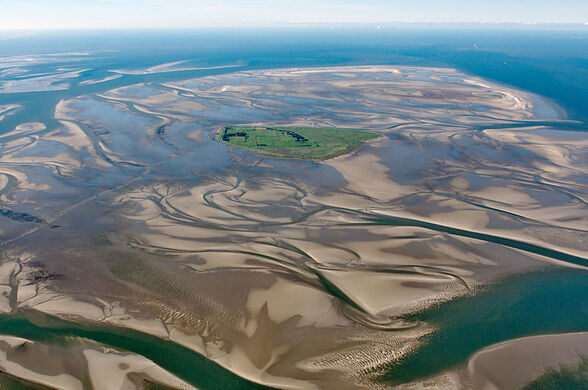 Rich with fauna and flora, nature-lovers can walk across the sea at this UNESCO World Heritage spot.

Imagine a seaside viewing platform that teeters with the tides.

There’s nowhere else in the world like the Wadden Sea.

The world’s largest continuous system of intertidal sand and mud flats, this vital wetland ecosystem — technically part of the North Sea tucked between the European mainland and the Frisian Islands — stretches from the Dutch province of North Holland northward through the river estuaries of Germany before ending in Esbjerg, a seaport in westernmost Denmark. Encompassing nearly 4,000 square miles of salt marshes, sweeping dunes and treasured national parks, the entirety of this vast coastal environment is designated as a UNESCO World Heritage area — obviously a very special place worth protecting.

Situated in the southernmost part of the Wadden Sea on the northern tip of the North Holland peninsula, is the municipality of Den Helder. Home to the Netherlands’ primary navy base and serving as a gateway of sorts to the Wadden Sea (Waddenzeein Dutch), Den Helder isn’t short on iconic public landmarks including historic Fort Kijkduin, the impressively tall Lange Jaap lighthouse and one particularly photogenic water tower.

The tidal flats of the Dutch Wadden Sea run a very real risk of becoming permanently submerged because of sea level rises and subsidence caused by gas and salt extraction, a report by the region’s lobby group Waddenvereniging shows. It is unlikely that the process of sedimentation – or bringing in new sand and mud – will keep up with the rising sea levels and the Wadden Sea eco system may be a thing of the past by the end of this century, the report says. The Wadden Sea stretches from Den Helder to Denmark and is a Unesco world heritage site. The area is an important breeding and overwintering ground for birds and has a rich fauna and flora while the Wadden Sea islands are popular Dutch holiday destinations.