Ambitious plans to create Sydney Harbour Bridge-style walking tours of the Forth Bridge have reached a “major milestone”. 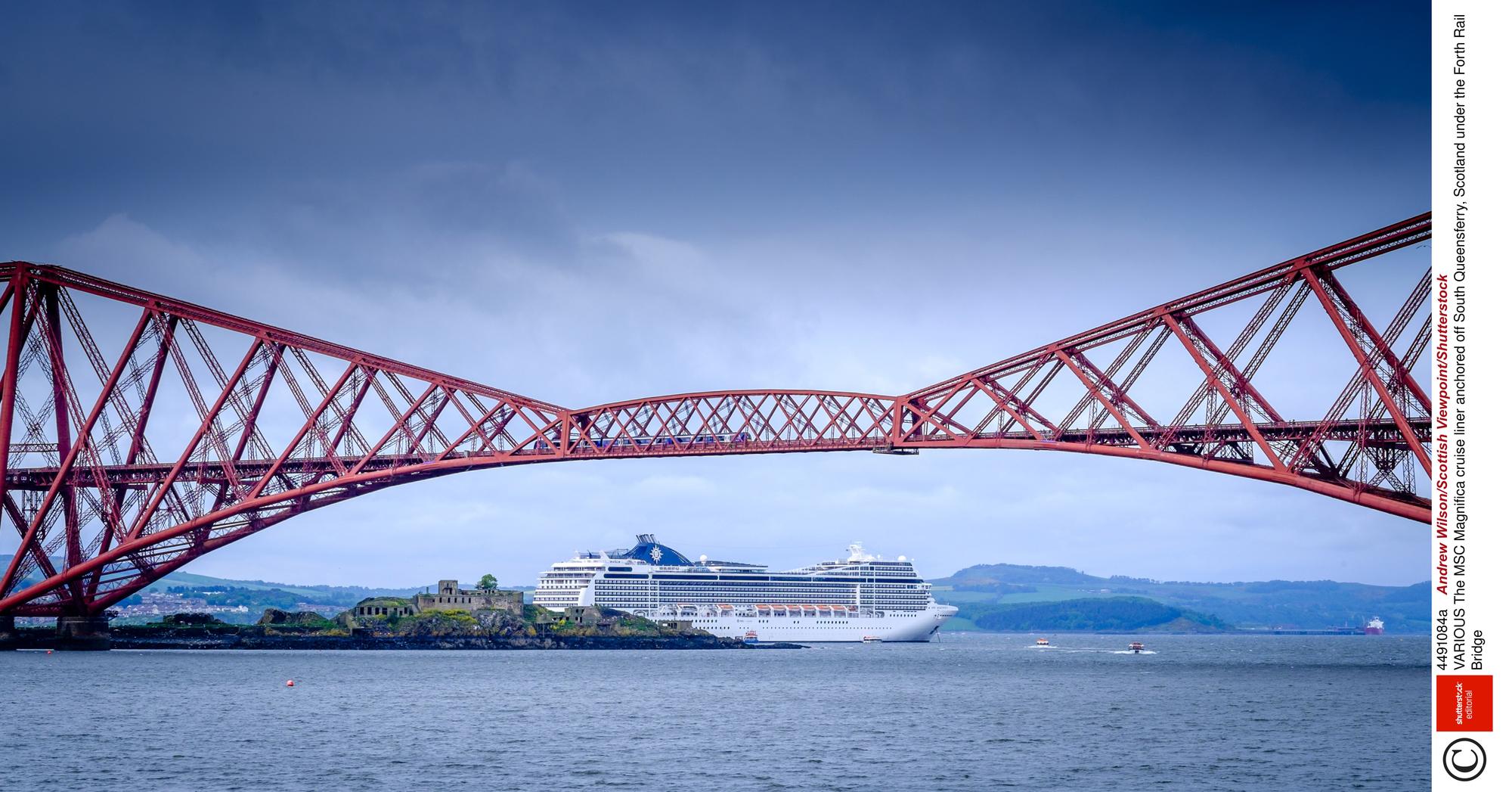 The row is linked to plans for a visitor centre and viewing platform.

Plans for a Sydney Harbour Bridge-style viewing platform on the Forth Bridge are due to be approved by councillors – despite widespread objections.

Spanning 541 meters over the Firth of Forth, Edinburgh’s Forth Railway Bridge became the longest cantilever bridge in the world when the future King Edward VII drove its final “golden” rivet on March 4, 1890. Its length was surpassed a few decades later by the Quebec Bridge in Canada, completed in 1919…

Source: Incredible Photographs From The Construction Of The Forth Railway Bridge, A 19th Century Engineering Marvel 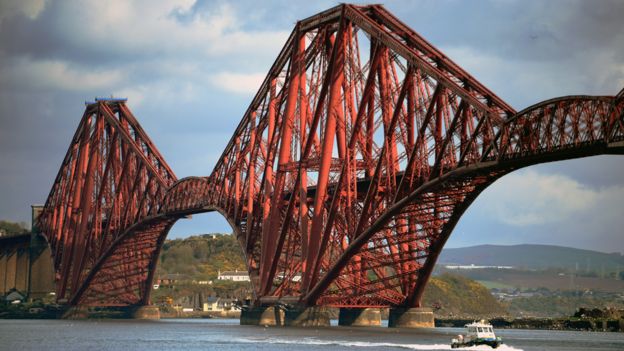 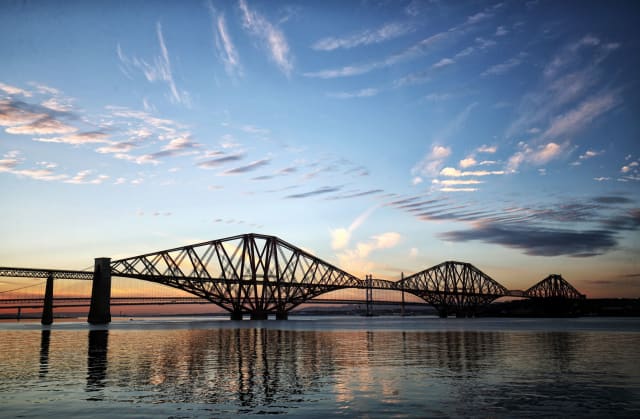 The Forth Bridge has been compared to the Egyptian pyramids and the Alhambra fortress in Spain as a new tourism strategy for the area was launched.The 10-year plan sets out steps to boost visitors… 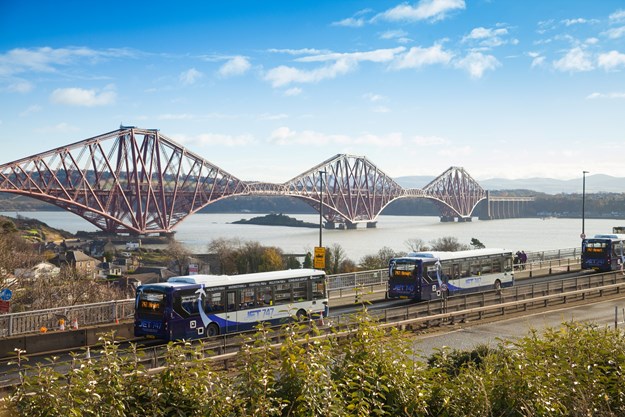 Step back in time this month as the Scottish Railway Preservation Society Border steam train tour returns to the timetable, writes Rosalind Erskine…

Stuart Sliver, 58, can already see the Forth Bridge from his home in South Queensferry, but that did not stop him from purchasing a 10ft by 4ft photograph of the enormous bridge.

Source: Granddad, 58, buys picture of bridge he can see from his window

On March 4, 1890, the Prince of Wales put a golden rivet in place, thereby declaring the Forth Bridge open. Crossed by about 200 trains a day even now, the Forth Bridge is an engineering marvel that has stood the test of time. A.S.Ganesh hands you the details of how this cantilever bridge came to be…

If you are someone who lives in Kolkata, or have visited the place during one of your holidays, then you surely must have seen the Howrah Bridge. A famous symbol of the city and the State, the bridge has connected Howrah and Kolkata from 1943. With a main span of 457 m, the Howrah Bridge was the third-longest cantilever bridge at the time of its construction and currently occupies the sixth spot.

Since the 19th century

Pont de Quebec in Canada with a span of 549 m and Forth Bridge in Scotland with a span of 521 m were the only ones that were longer than Howrah Bridge while it was constructed. And out of those two, the Forth Bridge has stood the test of time longer, as it came into existence in the 19th century…

Source: Bringing forth the Forth Bridge

The newest addition to the Forth Estuary, the Queensferry Crossing bridge, is set to open on 30 August 2017.

People have been crossing the water at Queensferry since as far back as the 12th century, but it wasn’t until the Victorian era that it became one of Scotland’s most important transport hubs.

With the rapid expansion of the railways in the 19th century, there was huge demand for a crossing that would allow trains to move quickly between Edinburgh and Fife on the east coast route. The traditional ferry system obviously wasn’t suitable for rail transport, and proposals for a tunnel were also rejected. Engineer, Thomas Bouch, then set out plans for a suspension bridge across the Forth, and the foundation stone was laid in 1873.

Engineer, Thomas Bouch, then set out plans for a suspension bridge across the Forth, and the foundation stone was laid in 1873.

There is no place in the world other than Scotland that has all three types of bridge together – a suspension, cantilever and cable-stayed bridge. Here is what you need to know about visiting Scotland’s three iconic bridges. Be ready to be impressed by their stunning views and delve into their history.

The Forth Bridge or also know as the Forth Railway Bridge was opened in 1890 taking 8 years to complete. The first cantilever bridge built in the UK.

Today it is a UNESCO world heritage site, attracting millions each year. You can take the train over this incredible structure from Edinburgh crossing the Firth of Forth to North Queensferry. Here you can walk through the coastal town and view the bridge from below.

The Victorian period was a time of great inventions and changes – science, medicine, engineering and social reforms to name but a few. And lets not forget the iconic Forth Bridge.

It’s one of the country’s most iconic structures and widely hailed as one of the industrial wonders of the world. At the time of its construction the Forth Bridge was one of the most daring engineering feats ever attempted. It took more than 4500 men to build it and eight years to complete, officially opening in 1890. It is also one of six events being supported by a £300,000 Signature Year of History, Heritage and Archaeology Events fund to celebrate Scotland’s six World Heritage Sites on Tuesday, April 18.

Back in 2014 a Scottish research group began laser scanning the Forth bridges, a group of bridges spanning the River Firth in Scotland. Using an initial £300,000 funding from the Scottish Government, the aim was to preserve the UNESCO World Heritage Site in digital form. Having successfully completed the scanning project, it has now been announced that Transport Scotland has provided a £425,000 grant in order to develop educational games, augmented reality applications and interactive virtual tours using the scans, these are set for release in 2018.

In order to digitally preserve the structure The Center for Digital Documentation and Visualization (CDDV), a partnership between Historic Environment Scotland and The Glasgow School of Art, used LIDAR to scan the historic site. CDDV have previously scanned other historic sites including the Sydney Opera House.

As Fife’s tourist industry gears up for a busy Year of History, Heritage and Archaeology, VisitScotland looks back at an “innovative” 2016.

Regional director for Fife, Manuela Calchini, said: “They say you have to look to the past to understand the present.

“Next year we celebrate Scotland’s fascinating history and Fife will play its part, including a wonderful opportunity to commemorate the Forth Bridge, one of Scotland’s six UNESCO World Heritage Sites, as we look forward to the opening of the new Queensferry Crossing.

“The spiritual home of whisky will once again thrive in Fife, with Lindores Abbey Distillery, whose grounds contained the earliest written evidence of whisky distillation in Scotland, due to open in 2017.

“But looking to the past – 12 months, that is – it has been another fantastic year in Fife.”

The Forth Bridge has won yet another award, this time being voted Scotland’s “greatest man-made wonder”.

The railway bridge, which opened in March 1890, beat off competition from the likes of Edinburgh Castle, The Kelpies and the Glenfinnan Viaduct to win the VisitScotland title.

The poll of more than 2,000 people across the UK was carried out as part of the Scottish Government’s Year of Innovation, Architecture and Design.

The Forth Bridge received 30% of votes, followed by Edinburgh Castle on 13%.

It is the latest title awarded to the bridge over the years, the most significant of which was its designation as a Unesco World Heritage Site in 2015.

He will look at why almost 70 men lost their lives building the bridge – now a UNESCO World Heritage Site – which links Edinburgh to the north and carries around 200 trains every day. A spokesman for the programme said: “This incredible engineering achievement was born from tragedy and paid for in blood.

“Construction began in the shadow of the Tay Bridge disaster, which had cost the lives of 70 passengers. “Almost the same number died during the construction of the Forth Railway Bridge.”