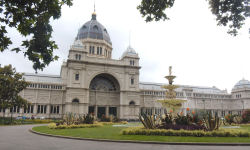 January 24, 2018: Last weekend saw Melbourne play host to the annual Brickvention at the Royal Exhibition Building, and Rebelscum was there to enjoy the Star Wars builds.

Each year volunteers from the Melbourne LEGO Users Group (MUG) puts on an Australian-based convention and public display for LEGO fans. This two-day event brings LEGO fans of all ages together from all across the country to view original and unusual creations built by local and regional bricksmiths. Open to the public it is a safe-haven for LEGO fans of all ages and levels of interest.

If you’ve ever been to a LEGO convention before then you’ll know what to expect – a central core with a Great Ball Contraption and a massive train set which combines a number of environment and building themes, surrounded by an endless number of MOC builds and dioramas. If you’ve never been to a LEGO event before think of the playroom you always wanted!